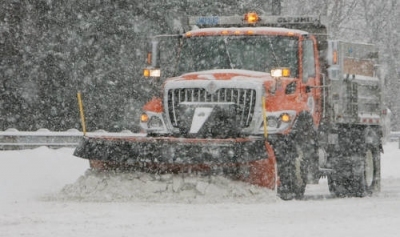 Last winter the City of Akron received a lot of blowback from citizens upset with the lack of response to a January storm that left several people stuck in the snow, some for days.

Mayor Dan Horrigan issued an apology to residents of Akron, saying they were re-evaluating their snow and ice removal process.

Fast forward to Wednesday, and it appears the City has revamped the winter-weather response, as Mayor Horrigan announced the new "aggressive snow and ice removal plan" ahead of the 2019-2020 winter season.

"We will have more plows and equipment and those trucks will have better access to the salt," the Mayor told the Jasen Sokol Show on Wednesday, shortly after rolling out the plan to the public. "There is also a route revision; we've reworked it so that it's more responsive to neighborhood needs."

One of the biggest changes to the winter strategy is that the City has ended their contract with ODOT that previously required the city to plow 150 miles of Akron highways. That responsibility now lies solely on ODOT, freeing up more resources to focus on city streets.

See more from the City of Akron below:

Akron Mayor Dan Horrigan was joined by City Council leadership and Public Works staff this morning as he unveiled his aggressive plan to overhaul the City’s approach to snow and ice removal for the upcoming winter season.  The new 5-point strategy includes significant improvements to equipment, technology, logistics, and training.

“Last winter we experienced a once-in-a-decade snow storm, which ended up revealing some unacceptable weaknesses in our system,” Director of Public Service John Moore said. “After that event, we immediately got to work critically evaluating every aspect of our strategy, with a commitment to being better prepared, across the board.”

“I am proud to say that today is a new day in terms of Akron’s snow and ice response,” Mayor Horrigan said. “For the 2019-2020 winter season, we will have more plow trucks, better access to salt, new routes, enhanced training, and better policies and technology to ensure we are maximizing our available resources and manpower. The singular goal is to get our streets cleared as soon as possible to reduce the dangers and hassle for residents and drivers.”

One important change was the decision not to renew the ODOT maintenance agreement, which has been in place for over 50 years, in which the City maintained state interstates within its borders. By concluding that agreement, the City will have additional trucks, materials and manpower to dedicate to Akron streets.  The City will make up for the lost revenue from that agreement with a portion of the new, additional gas tax revenue from the State of Ohio, estimated at an additional $3.2 million annually.

The full 5-point improvement strategy is summarized below.

·        13 additional smaller 1-ton trucks outfitted with plows and/or salt spreaders which will be used for complaint-response in every City ward.

·        Continuing work with logistics experts to maximize effectiveness and efficiency

·        Internal Constant Improvement Team established to review responses to events and make changes and improvements before the next event.

“While we do still live in Northeast Ohio where Mother Nature ultimately wins—this is about delivering the services that residents expect and deserve—effectively and efficiently,” Mayor Horrigan remarked, “I want to thank City Council, our residents who shared their thoughts and input, and especially the hardworking City crews that work long, challenging shifts during major storms.  With these important enhancements, I’m confident we are appropriately prepared for the coming winter season.”

“This is truly an aggressive new strategy, and I am pleased with the investment and dedication it demonstrates,” Council President Margo Sommerville said.  “I want to thank the citizens of the Snow and Ice Task Force for their assistance.  City Council looks forward to partnering with the administration to deploy these new policies and strategies to improve our ability to effectively clear city streets of snow and ice this winter.”

Additional information about the new and improved strategy, along with a detailed “Snow and Ice FAQ” is available on the City’s website and also on the City Council website.  As always, residents with concerns or complaints should contact the Mayor’s Action Center by dialing 3-1-1 or (330) 375-2311 or submitting online at www.akronohio.gov/311.