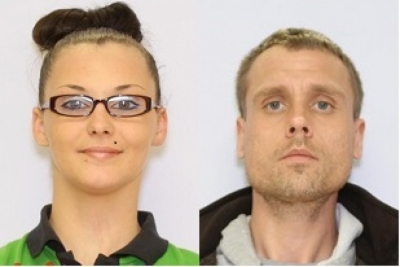 Two Akron-area fugitives are in custody after leading police on a high-speed chase Tuesday morning.

Shaun Phipps and Ashleigh Mayfield were spotted in a Wal Mart parking lot in Madison Township. Phipps was behind the wheel and took off. Highway Patrol eventually deployed spike strips.

The duo was wanted in connection to two armed robberies, one at a Stow Speedway, the other at a North Canton Burger King. They're both facing a litany of charges.

The Stow Police Department has released the names of the two suspects in the armed robbery of the Speedway gas station at 1045 Graham Road on February 23rd.

The suspects (pictured) have been identified as Shaun Patrick Phipps and Ashleigh Michelle Mayfield.

In addition to robbing the gas station of cash and cigarettes, the two are accused of stealing an employee's Honda CRV with Ohio license plate GST-6352.

Arrest warrants have been issued for Aggravated Robbery and Grand Theft of a Motor Vehicle.

The pair are believed to be homeless but have been known to frequent the Akron and Canton area. Police believe they may still be in possession of the stolen vehicle.

Anyone with information about either of their whereabouts are asked to call Stow PD immediately at (330) 689-5700. Det. Dolezal is lead on the investigation.