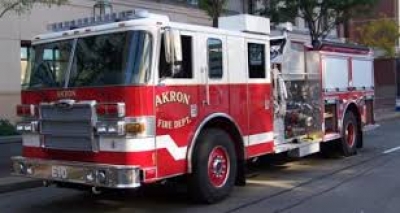 All lanes of Route 8 between Tallmadge Avenue and  Howe Avenue, are open this morning, after yesterday's fiery crash involving a car and a gasoline tanker truck. The driver of the tanker truck escaped serious injury, but the driver of the car, 18 year old Jared Marcum, of North Canton, was killed.
The highway was damaged, and repairs continued into late last night. Some gasoline got into a storm drain, and flowed out into the Cuyahoga River, and as a result, fishing is prohibited in that area near the high level bridge, at least until the 29th.
More than 100 homes were evacuated, and there have been no reports so far of anyone being overcome by fumes. Akron Fire officials advising though, if you live in the area, and smell gasoline in your home; call 9-1-1, and they'll come check it out to make sure you're safe.
___________________________

City of Akron and ODOT repair crews are working on State Route 8 North at the site of the fiery crash which this morning closed both sides of the highway, when a car and gasoline tanker truck colided. While the driver of the truck escaped injury; the driver of the car, whose name is being withheld pending notification of family, was killed.

The highway was damaged. Toxic waste was discharged into the river near the high level bridge through a city storm sewer. Summit Metro Parks has suspended fishing in the area until August 29th, as a precaution.

Cleanup is underway, and Route 8 Northbound between Tallmadge Avenue and Howe Avenue is down to one lane while they work on repairs through 10:00 this evening (Tuesday), so expect delays in that area.

More details here, in the City of Akron's Press release:

Akron, Ohio, August 25, 2020 (4:00 PM)—Akron Police and Fire responded to Route 8 N between Tallmadge Ave. and Cuyahoga Falls Ave. for a vehicle crash involving a car and a gasoline tanker at 7:44 a.m. The collision resulted in a tanker truck fire causing Route 8 north and southbound traffic to be diverted for several hours. Fire companies reported heavy smoke from the scene and deployed the Haz-Mat and Foam Truck to the scene for additional resources to handle the fire.

Due to the dangerous conditions of fire and toxic gas in the area, residents and businesses were notified just before 8:00 a.m. for evacuation. Approximately 100 homes in the area were contacted for evacuation and safety purposes.  Metro RTA buses were available for residents to temporarily evacuate at a safe distance. Akron Police, Ohio State Patrol and University of Akron Police were on scene to re-direct traffic, assist with evacuations, and crash scene investigation. Additional Akron Fire personnel were on hand to monitor gas levels inside of homes near the crash site. Any residents who smell the odor of gas throughout the evening are encouraged to call 9-1-1 so Akron Fire may come out and measure gas levels.

The crash scene is still being processed for evidence by the Akron Police Accident Reconstruction Unit and remains under investigation.

Due to the severity of the crash, there was one fatality, the driver of the car.  The driver of the tanker truck did not sustain any serious injuries.  The Summit County Medical Examiner’s Office will conduct an autopsy.  The victim’s name is being withheld pending positive identification and family notifications.

The fire also impacted City of Akron infrastructure.  The accident site was very near to a storm sewer inlet.  Some of the gasoline leaked from the tanker and entered this storm sewer and traveled within the sewer pipe to its discharge point at the Cuyahoga River near the High Level Bridge.  The Akron Fire Department utilized flame retardant foam to reduce the flames and break down the gasoline.  An emergency environmental remediation company, on behalf of the tanker company, is performing additional remediation work, including placing absorbent booms which restrict access to the affected place along the River.  Summit Metro Parks has suspended fishing in the area until August 29th, as a precaution.  For more information about any temporary impact on recreation at this location of the River, please visit the Summit Metro Parks, Park &Trail Alerts page at www.summitmetroparks.org/summit-metro-parks-alerts.

The affected storm sewer carries rainwater from the roadway and into a discharge point of the Cuyahoga River nearby.  This pipe is not a combined sewer pipe and does not connect to residential sanitary sewer drains. The City will be conducting an assessment of any damage to this storm sewer and making any necessary repairs.

The large fire also severely damaged the roadway of Route 8 northbound.  As soon as the wreckage recovery and removal was complete, City contractors began emergency work to repair and repave the damaged portion of the road, in coordination with the Ohio Department of Transportation (ODOT).  State Route 8 northbound between Tallmadge Ave. and Howe Ave. will be reduced to one lane today, August 25, starting at 4:00 p.m. through 10:00 p.m. tonight for pavement repairs. Motorists can expect delays.

“I am incredibly proud of the organized and professional response from our emergency responders today,” Akron Mayor Dan Horrigan said. “Akron Police, Akron Fire and our Service Department crews, in coordination with many of our local partners, worked diligently and efficiently to reduce the risks and impacts of this serious and tragic event on the public.”

Rt  8 North between Tallmadge Avenue and Howe Avenue still blocked after a fiery crash involving a tanker truck and a car. At this time, it is still burning.

Get the latest details with WAKR's Jeanne Destro, as she talks with Akron Fire Department Spokesperson, Lt. Sierjie Lash.

More in this category: « Violent Akron Fugitive Wanted For Towpath Shooting, More One Arrested, Three Shot After Incident in Green Apartment »
back to top