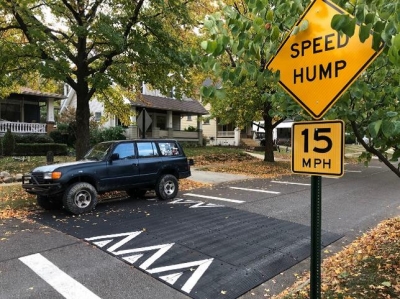 Speed Table Lakewood, OH City of Akron
The City of Akron and AMATS are installing speed tables on some residential streets, part of a safety pilot program to curb speeding through Akron neighborhoods.
The tables will be installed early next week along Edgewood Avenue and Shocalog Road on a temporary basis.
If proven successful, Mayor Horrigan says more permanent speed tables will be installed in other areas.
See more from the Mayor's Office below:

(CITY OF AKRON) Akron, Ohio, August 28, 2020— The City of Akron and the Akron Metropolitan Area Transportation Study (AMATS) are launching a traffic calming pilot program in two Akron neighborhoods.  The City and AMATS will test the effectiveness of speed tables at reducing speeding, starting in late August 2020.

Speed tables are raised areas placed at mid-block points across roadways and are designed to limit the speed at which vehicles travel.  Unlike speed bumps, tables have tapered ends and long flat tops to accommodate the entire wheelbase of most passenger cars.  Akron’s tables consist of interlocking pieces made from recycled rubberized material and will be bolted and glued into place on street surfaces. (An example photo of a similar speed table is attached). The program will officially begin when the tables are installed during the week of Aug. 31, and will continue through early November.

“Speeding in residential areas is one of the most common concerns we hear from Akron residents, and we are committed to exploring creative solutions to calm traffic and ensure our streets are safe for all users,” Akron Mayor Dan Horrigan said of the pilot program. “If successful, this pilot program may lead to permanent speed table installations in targeted neighborhood locations.”

City of Akron Deputy Service Director Eufrancia Lash added that the project is designed to enhance safety, while minimizing disruption to roadway services, like snow plowing. “The City of Akron will temporarily install one table on Edgewood Avenue and two on Schocalog Road, to determine whether they are an appropriate long-term strategy to address speeding concerns,” Deputy Director Lash said.

The pilot program was inspired by similar programs in other cities including Lakewood, Ohio.  The City worked with these communities to learn best practices and develop a robust communication strategy with each affected neighborhood. The initial pilot locations were chosen based on several factors, including recorded history of traffic concerns, minimizing potential disruption to emergency vehicles, posted speed of the street, volume of traffic, and Metro Transit Authority bus routes.  (See attached map for planned locations).

Temporary signage will be posted to alert drivers to the speed tables, and AMATS is hosting a web site to seek public feedback regarding the tables: https://amatsplanning.org/akron-speed-tables/.  Residents are encouraged to direct their feedback there.

AMATS is already at work collecting pre-pilot speed data on Edgewood Avenue and Schocalog Road using its MioVision cameras and radar speed counters. The agency will continue to collect data throughout the life of the program to determine what impact the tables have on driving patterns.

“We’re excited to help Akron pilot this program,” AMATS Director Curtis Baker says.  “What we learn from this experience can be applied throughout the Greater Akron area.”

The success of the program will determine whether speed tables are an effective low cost tool to curb speeding and determine their appropriateness for other installations around the city.  Residents who would like to suggest potential locations for future speed table installations can visit the AMATS feedback website and leave a comment. https://amatsplanning.org/akron-speed-tables/.

More in this category: « One Arrested, Three Shot After Incident in Green Apartment Summit County Board of Health Issues Mask Resolution »
back to top