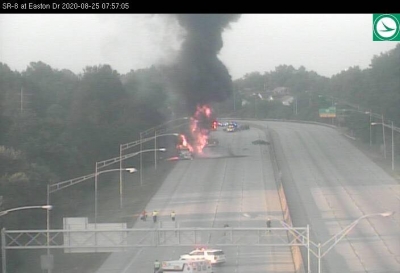 Charges have been filed in connection to the deadly, fiery crash along Route 8 North in Akron back on the morning of August 25th.

That morning of the 25th, just after 7:30 a.m. during rush hour traffic, a truck tire blew out along the northbound lanes of Route 8 just south of Cuyahoga Falls Avenue, leaving debris spread across all lanes of Route 8. In an effort to avoid the debris, 20-year-old Christopher Lonkart of Akron swerved across two lanes while hitting his brake. That's when he slammed into 18-year-old Jared Marcum's vehicle, forcing Marcum into a tanker truck.

After colliding with the tanker truck, Marcum's vehicle was dragged for a short distance, causing friction and sparks, eventually leading to a fire and explosion. Marcum was trapped in his car under the tanker truck and died in the incident.

On Tuesday August 25, 2020 at approximately 7:38 a.m. an unknown tractor-trailer was traveling northbound on State Route 8 just south of the Cuyahoga Falls Ave. exit 3B when he suffered a tire blow-out.  As a result, tire debris was strewn across all lanes of the expressway.   Traffic began to react to the debris by braking hard and swerving to avoid striking the destroyed tire.  A tractor-tanker trailer was north in lane 3.  In lane 1,  a Hyundai began to brake when a Honda, Lonkart's vehicle, broke hard and swerved left then hard right striking the Hyundai in front of him.  As a result, the Hyundai was forcibly redirected hard right crossing lane 2 then striking the tanker directly in front of its tandem wheels.  The tanker truck began to veer right dragging the Hyundai  along with it.  As a result of the impact and friction, the tanker caught fire and came to rest on the shoulder.  Unfortunately, the driver of the Hyundai was trapped in his vehicle and did not survive.  All other parties involved escaped without injury.
Read 2057 times
Tweet
Published in Local News
Tagged under