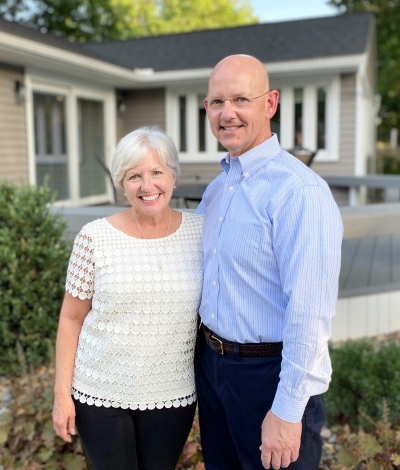 (American Red Cross) Community leaders Nick and Cindy Browning have been named the recipients of the 2021 H. Peter Burg Community Leadership Award. The Brownings were selected by a committee of past award winners and will receive the honor during a visual presentation of the 25th Annual Acts of Courage event on March 4, 2021.

The American Red Cross of Greater Akron and the Mahoning Valley proudly presents the H. Peter Burg Award each year to one or more individuals who best exemplify leadership in the community, compassion for its people and dedication to the humanitarian mission of the Red Cross.

As president of The Huntington National Bank’s Akron region, Nick Browning engages leaders throughout the bank to better serve Huntington’s colleagues, customers and the communities in which they do business. Nick is also proud to serve as president of the Huntington-Akron Foundation, which is dedicated to improving the lives of individuals and their families within the city’s most at-risk neighborhoods and distributes $2,000,000 annually to over 100 non-profit organizations.

Cindy is a dedicated community volunteer, having retired from Summa Health in 2017. During her 35-year nursing career, Cindy specialized in home health and hospice care. Her passion for hospice continues as a volunteer for Hospice of Summa, and through her work for Grace House Akron, where she is the volunteer coordinator and serves on the capital and policy committees.

The Brownings also volunteer their time to many organizations in the Greater Akron community. Cindy serves on the Humane Society of Summit County Board and enjoys volunteering at the First Congregational Church of Akron’s food pantry.

While CEO of FirstEnergy and chair of the local Red Cross board of directors, H. Peter Burg established a legacy of dedicated service to the Greater Akron community.

Following his death in 2004, the American Red Cross established the award in Burg’s name to honor his memory and inspire others. By bestowing the award on the Brownings, the Red Cross recognizes his effective and dedicated community service.

The Brownings will join an esteemed list of community leaders who received the award. The list includes:

Traditionally, the Red Cross bestows the H. Peter Burg Award during a dinner presentation which takes place during the Red Cross Acts of Courage event. However, recognizing the unprecedented crisis presented by the COVID-19 pandemic, but wanting to continue to honor community leaders and ordinary individuals who have acted courageously and selflessly in a time of emergency, the Red Cross of Greater Akron and the Mahoning Valley has made the 2021 event virtual.

In addition to the H. Peter Burg Award, the Red Cross of Greater Akron and the Mahoning Valley will be honoring Greg and Alice Greenwood of Greenwood Chevrolet in Youngstown with the Spirit of the Red Cross Award.

If your company or organization is interested in sponsoring the 2021 H. Peter Burg and Acts of Courage Awards event, please contact Rachel Telegdy at 330-535-6131.

To nominate individuals for heroic acts of courage, visit redcross.org/nohheroes. The deadline to submit nominations is Dec. 31, 2020.

More in this category: « Woman Arrested for Akron Stabbing Suspect Crashes Stolen Car Into OSHP Cruiser in Fairlawn »
back to top