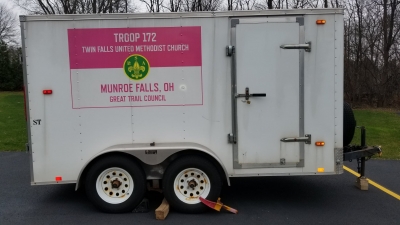 Munroe Falls Police Department
A week ago, things didn't look too hopeful for Boy Scout Troop 172 out fo Munroe Falls after a trailer containing all of their camping gear had been stolen out of the Twin Falls United Methodist Church parking lot. That is the same place the troop has stored the trailer for about a decade without any previous incident.
The estimated cost of the stolen trailer and equipment was roughly $10,000, leaving the troop down on their luck and out a lot of money. Money that they didn't have.
Well, in just over a week's time, thanks to the Munroe Falls community, local news outlets, and countless others who stepped up, Troop 172 was able to raise nearly $14,000 to help replace the stolen items.
Additionally, donations of camping gear were made, making it an even better story for the local troop.
Meanwhile, Munroe Falls Police are still looking for the stolen trailer and the person or people who took it. Anyone with information is asked to call the department at 330-688-3555.
Read 1079 times
Tweet
Published in Local News
Tagged under

More in this category: « USPS Hiring in Akron, Cleveland Akron Police: Help Us Find Robbers! »
back to top