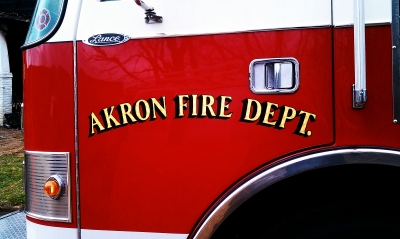 Akron Fire issuing a statement after an incident involving a civilian who was filming firefighters cleaning up after a crime scene in the city back on March 27th last week.

The video shows one firefigther who was spraying off the sidewalk turn the hose on the man who was recording on his cellphone. The firefighter was then heard saying, "This is a crime scene, dude" to which the man replied that he didn't see any tape and remained on the scene for several minutes, still filming.

After an investigation into the incident, Akron Fire Lieutenant Serjie Lash issued the statement condemning the actions of that unnamed firefighter, calling it "inexcusable behavior" that is "not approved by the remaining crew members, nor any police or Akron Fire Department authority."

In the statement, Lieutenant Lash notes that Fire Chief Clarence Tucker apologizes on behalf of the department, though there is no word on any disciplinary action the department is taking.