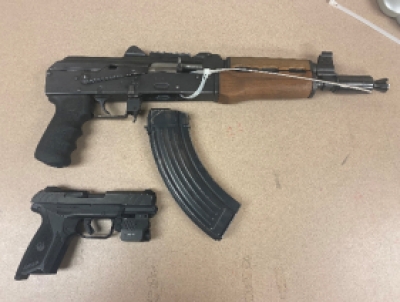 Confiscated Weapons Akron Police
Two Akron teens are facing multiple charges after a routine traffic stop early Sunday morning.
Per the Akron Police report, a driver was stopped near North Main Street and East Tallmadge Avenue Sunday morning around 1 a.m. due to an equipment violation on their vehicle.
While walking up to the vehicle, officers noticed a teenager in backseat who appeared to be trying to conceal an AK-47 rifle at his feet on the floor of the vehicle.
All of the teens in the car were asked to step out and officers then found a pistol in the pocket of the 18-year-old male who was in the front passenger seat.
According to the report, the underage teen in the backseat was arrested and charged with improper handling of a firearm in a motorvehcile. and taken to the Summit County Juvenile Detention Center.
The front seat passenger, 18-year-old Lenier Worthy, was arrested and charged with carrying a concealed weapon and taken to Summit County Jail.
The female 16-year-old driver was issued a citation for the initial equipment violation and released.
Read 1910 times
Tweet
Published in Local News
Tagged under

More in this category: « Akron-Native, Black Keys Drummer to Fill-In for Tribe Hype Man Copley Police Looking For Burglary Suspects »
back to top