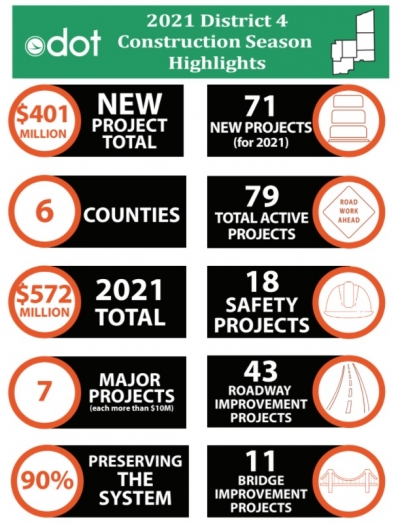 In a press conference Thursday, ODOT laid out their projects for the 2021 construction season, including one especially large project for Akron's Central Interchange.

(ODOT) A year ago at this time, the future seemed uncertain as we were navigating a global pandemic. However, one thing remained on track in 2020 and that was the Ohio Department of Transportation’s commitment to the maintenance and safety of Ohio’s roadways. The 2021 construction season will be no different!

During today’s construction kick-off, officials were excited to announce the start of a project that has been a long time in the making. The SR 18 widening and reconstruction between Alber Rd. and Nettleton Rd. in Medina County will begin active construction this year. The original planning study for this corridor began in 2003, with approval to move forward in 2005.  The goal of the project is to improve safety by increasing capacity and decreasing congestion to improve the flow of traffic along the corridor.

“ODOT, Medina County Engineer, city of Medina, Medina and Montville townships, and our stakeholders are pleased this project will be moving forward,” said ODOT District 3 Deputy Director Bob Weaver. “We want to remind motorist to always pay extra attention as they go through construction projects such as this, as traffic patterns change frequently and may not be the same as it was the day before.”

Work on this $24 million dollar project will begin later this month and is expected to be complete in June 2024.

ODOT officials also discussed how safety is always a top priority for the Department. “Sadly, traffic deaths continued to climb last year, even with fewer vehicles on our roads,” said ODOT Director Jack Marchbanks. “We must continue to prioritize projects that make our roads safer for everyone who uses them.”

This year there will be 45 safety projects in northeast Ohio that include Safe Routes to School projects, intersection safety, sidewalk installations, ramp improvements, and more.

A few of the safety projects that will take place this year include:

Across northeast Ohio there will be 104 roadway maintenance projects that include a new roadway, intersection improvements, widening and resurfacing and 60 bridge projects ranging from minor repairs and painting to complete replacement.

Learn more about the projects mentioned above, and many more online in our District Construction Guides:

Motorists are also reminded about Ohio's "move over law" which requires drivers to move over for vehicles with flashing lights. If they cannot move over, they must slow down.