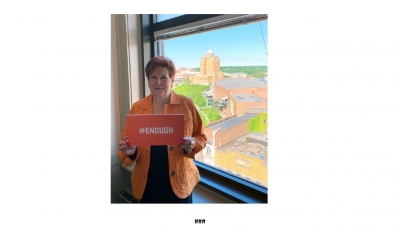 County Executive Ilene Shapiro Summit County
Summit County Executive Ilene Shapiro and County Council passing a resolution recognizing today, June 4th, as National Gun Violence Awareness day in Summit.
In a release sent Friday morning, Shapiro said she hopes that federal lawmakers can pass common sense gun laws that protect innocent lives and also protect second amendment rights.
Read that full press release from the County below:
--
SUMMIT COUNTY, OHIO—Summit County Executive Ilene Shapiro and County Council passed a resolution recognizing June 4 as National Gun Violence Awareness Day and called on residents to honor and remember all victims and survivors of gun violence. To commemorate the day, Executive Shapiro encouraged County residents to wear orange in recognition of the awareness campaign.
The Wear Orange Campaign began in response to the death of a Chicago teen in 2013. Hadiya Pendleton was shot and killed at age 15, just one week after she performed at President Obama’s second inaugural parade. Her friends wore orange in her honor and asked others to stand up and speak out against gun violence. The selection of orange as the campaign color is a nod to hunting culture and acknowledges that America has a proud heritage of responsible gun ownership and reflects the value of human life.
According to research, nearly 100 Americans are killed each day by guns, and firearms are the second leading cause of death for American children and teens. Research also indicates that access to a gun increases the risk of death by suicide by three times, and that Americans are 25 times more likely to be killed with guns than people in other developed countries.
“Every day we lose family members and friends to preventable tragedies. We can and must do better,” said Executive Shapiro. “I know our state and federal lawmakers can find shared ground to balance 2nd Amendment rights with common sense gun laws that will protect our communities from devastating gun violence. By raising awareness, we encourage our state and federal lawmakers to take steps towards real change on this issue. Enough is enough.”
To learn more about Wear Orange and National Gun Violence Awareness Day, please visit https://wearorange.org/.
Read 353 times
Tweet
Published in Local News
Tagged under

More in this category: « Jewett and Kerr Parks Win Akron Parks Challenge Mansfield PD Looking for "Person of Interest" in Attack on Elderly Resident »
back to top