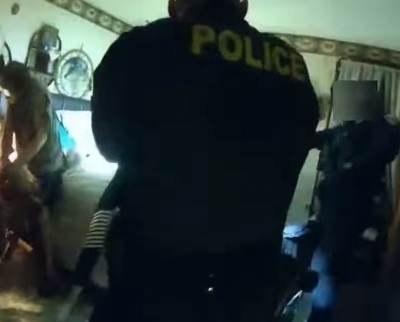 Akron police have released additional body worn camera (BWC) video of an officer-involved shooting that took the life of a 58 year old man who had been holding his estranged wife at knifepoint in her home on  26th Street S.W., on December 23, 2021.

James W. Gross was fatally shot by officers, after they initially tried using a taser to get him to drop the knife he was holding on his ex-wife, after breaking into her locked bedroom. She had retreated into that room, along with her boyfriend, after Gross, against whom she had a legal protection order; broke into her home.

The incident is still under investigation by state law enforcement authorities, and the additional video of the incident, shown from the perspective of cameras worn by several officers on the scene, was just made public by Akron Police, in accordance with the City’s recently enacted ordinance requiring body cam footage be made available to the public in a timely manner whenever there is a deadly use of force on the part of officers.

WARNING: The video below may be disturbing to some audiences. Viewer discretion is advised.

Follow this link to view all the videos related to this incident.

The most recent one is shown first. If you watch the earliest one; you can hear the original 9-1-1 call, as well as an Akron Police spokesperson explaining how the incident happened, and showing still photo screen-shots that make images visible that are not readily apparent when you just watch the videos themselves.

Akron Police are not releasing any further information at this time, or making any public statements about it, other than to say it is still under investigation.

More in this category: « VIDEO: OSHP Trooper's Cruiser Hit During Portage Traffic Stop U.S. Marshal: Missing Teen Believed To Be In Akron »
back to top