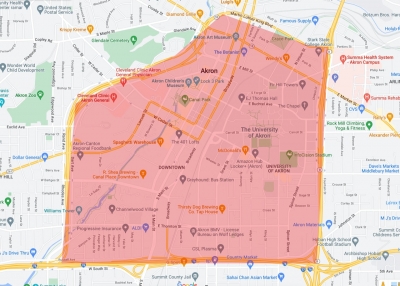 One day after releasing the body camera footage of the fatal police shooting of 25-year-old Jayland Walker, the City of Akron has implemented a curfew for the city.

Protests that remained peaceful in the days leading up to the release of the footage and throughout the day Sunday, July 3rd, turned violent and destructive after dark and into the overnight. Damage to businesses along Main Street downtown has been documented, including several businesses with windows shattered. Akron Police deployed tear gas to disperse a crowd from outside the APD building on South High Street. According to the Akron Municipal Clerk of Courts website, there were dozens of arrests made last night. The charges range from Failure to Disperse to Rioting to Disorderly Conduct and more.

Monday morning, business owners and volunteers were seen cleaning up shattered glass and other property damage.

In addition to the curfew, the City of Akron has canceled it's Fourth of July fireworks display downtown, at Paterson Park, and at the Akron Fulton airport. Also, the Akron RubberDucks have rescheduled their game against the Altoona Curve that was supposed to be played at Canal Park. The series with the Curve will continue in Akron on Wednesday, July 6th. Anyone that purchased a ticket to Monday's game can exchange it for any regularly scheduled regular season RubberDucks game.

The following is a release from the City of Akron regarding the curfew and the cancelation of Monday's fireworks:

(City of Akron) - The City of Akron has issued a curfew for downtown Akron from 9pm-6am which will remain in effect until another order has been issued lifting the curfew. See the full order here. The fireworks which were scheduled for downtown Akron, the Patterson Park Sports Complex, and the Akron Fulton airport have all been cancelled for tonight.

For the purposes of this order, downtown Akron is delineated as follows:

Those excepted from the curfew restrictions are as follows:

Akron METRO RTA is suspending service early on Monday, July 4th in the wake of the curfew. Per a press release Monday, all METRO services will end with the 8 p.m. outbound trips from the Transit Center.

“Early yesterday, we had several peaceful protests in the downtown footprint related to the officer-involved shooting of Jayland Walker. These protests did not escalate to violence and destruction. I want to first thank them. As I stated yesterday, I fully support our residents’ right to peacefully assemble. What we have been calling for since the beginning, and what the Walker family and many community leaders and faith leaders have also urged, is peace. However, as night fell and others began to join, the protests became no longer peaceful. There was significant property damage done to downtown Akron. Small businesses up and down Main St. have had their windows broken. We cannot and will not tolerate the destruction of property or violence. In light of the damage that has occurred and in order to preserve peace in our community, I have declared a state of emergency, implemented a curfew and canceled the fireworks which were scheduled for tonight.”