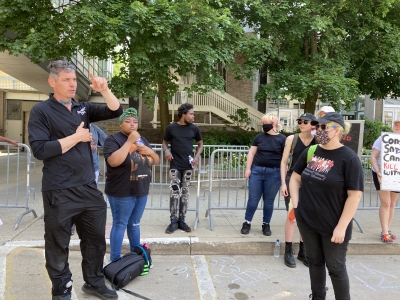 Despite some sporadic violence like window breaking, dumpster fires, and police using tear gas late last night in downtown Akron related to protests against Akron police shooting and killing 25 year old Jayland Walker last week; the scene was calm and very empty just after noon today, when there was supposed to be another protest march.

People on the scene said they'd heard the marchers had started at Mayor Dan Horrigan's house in Akron's North Hill neighborhood, and that they hadn't shown up in front of the Akron Police headquarters on High Street yet. Fox News is reporting now (as of 2:25 PM) that there is a protest in that location.

it was hot, sunny, and completely still, with the only sign of last night's sporadic violence, being some smashed windows in big city trucks that had been parked across streets to block traffic.

What made it particularly eerie, was knowing that before this all happened; there were supposed to be thousands of people milling about, munching on award-winning ribs, and enjoying Akron's annual "Rib, White, and Blue" festival.

Now, the streets were just empty, and even tonight's planned fireworks have been cancelled as a 9PM-6AM curfew goes into effect tonight until further notice. The Akron RubberDucks game against Altoona, has been postponed, as well.