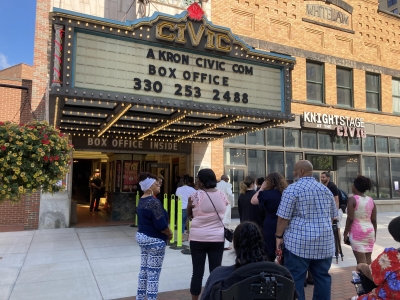 Friends, family, and community members wishing to pay their respects to Jayland Walker began lining up for his memorial service at the Akron Civic Theater little after 10AM this morning. Viewing hours for the open-casket remembrance last until 1PM, when the funeral will begin.

The Walker family is planning a press conference for after the funeral, sometime between 2:00 and 3:00PM. In a press release, they said that Akron Native and NBA superstar, LeBron James, as well as well-known filmmaker, Spike Lee, would be among those attending the funeral.

Walker was shot 60 times by eight Akron Police officers on June 27. They reported that he fled a traffic stop, shot at them during a police chase on the highway, and that he presented what they perceived as a threat, when he got out of his car in a parking lot. He was unarmed when he was shot, but police found a gun in his car.

That explanation, along with all other evidence connected to the incident, is now being examined by the Ohio Bureau of Criminal Investigation, and will be presented to a Grand Jury for consideration once their investigation is complete.

Akron City Council has declared today a day of citywide mourning, and there will also be several interfaith Community Prayer Vigils from 6 to 7 PM tonight at the following locations: