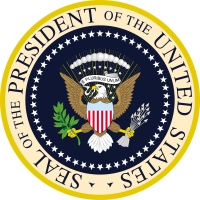 Presidential Seal ncsha.org
On January 20th, Joseph R. Biden will become the 47th president of the United States. With the pandemic and threats of violence and insurrection in the air, this inauguration will be unlike the others, especially the more recent gatherings. For a little background on the Inaugural Address and some of the more famous speeches to come from it, from Franklin D. Roosevelt to John F. Kennedy, history professor at the University of Akron, Dr. Kevin Kern, shared his expertise.
After serving just one term as president, what will be of Donald Trump’s legacy? Dr. David Beer, professor of political science at Malone University, discussed Trump’s positives, which are the three Supreme Court justice appointees, as well as the negatives, most notably the two times being impeached by the House and the COVID-19 response.
As for the inauguration itself, which some have suggested should be moved indoors to a safe place, CBS News military analyst Jeff McCausland discussed the beefed up security presence at the Capitol.
Read 299 times
Tweet
Published in Ray Horner Morning Show
Tagged under

More in this category: « NAACP President on the Words of Martin Luther King Jr. Dr. John Green Previews What to Expect From Biden Administration »
back to top