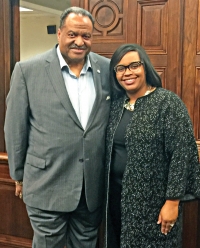 Marco & Margo Sommerville Akron.com
WAKR and the Ray Horner Morning Show are featuring a member of the black community in Akron who have made an impact by their courage and leadership. It was a family affair today, as Marco Sommerville and his daughter, Margo, stopped by. Marco has served in Akron City Council, served on various committees, and has operated Sommerville Funeral Services for the last four decades. Margo has carved an impressive path for herself, now as the president of Akron City Council. Akron’s Celebration of Black History this month is brought to you by the Akron-Summit County Public Library and the Metro Regional Transit Authority.
Read 657 times
Tweet
Published in Ray Horner Morning Show
Tagged under