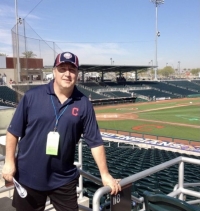 Ray at Goodyear Ballpark Raymond Horner on Facebook
Day 3 of Indians Radio Week is here, though the interviews are conducted on one end from the Tribe's spring training facility in Goodyear, Arizona, and the other end on West Market Street in Akron, Ohio. Ray Horner had a good chat with hall of fame broadcaster Tom Hamilton about the stiff competition in the outfield, middle infield, and first base, and who will be the defacto leader of this team.
Logan Allen is a young arm that has been with the ballclub since 2019, and he's one of the few southpaws on the squad.
Paul Quantrill played 14 seasons in the big leagues, and now his son, Cal, is in the bigs. Like Allen, Quantrill also came over to the Indians from the San Diego Padres two years ago.
Read 1133 times
Tweet
Published in Ray Horner Morning Show
Tagged under