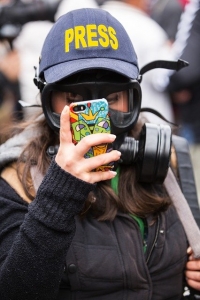 A new survey from the Newhouse School at Syracuse University shows more than one in five TV News Directors at local stations in the US report there were attacks on their newsroom employees in 2020.

The bigger the market; the more likely there have been attacks, with 39% of news directors in top 25 markets reporting such incidents. Reporters, photographers, and other news employees were also attacked, threatened, or both, in smaller markets as well.

The survey shows that almost half of the attacks were against crews covering what news directors described as riots, protests, and civil unrest, and that many news organizations have made changes to increase the physical security of both their buildings, and their employees.

Attacks included news crews being surrounded and threatened, hit with pepper spray, verbally harrassed, shoved, spit on, and hit with water bottles. One reporter and photographer were even attacked on-air just as their live shot was getting underway.

More in this category: « Help For Low Income Renters Facing Eviction or Discrimination Drug Overdose Deaths on Rise Nationwide, and In Summit County »
back to top