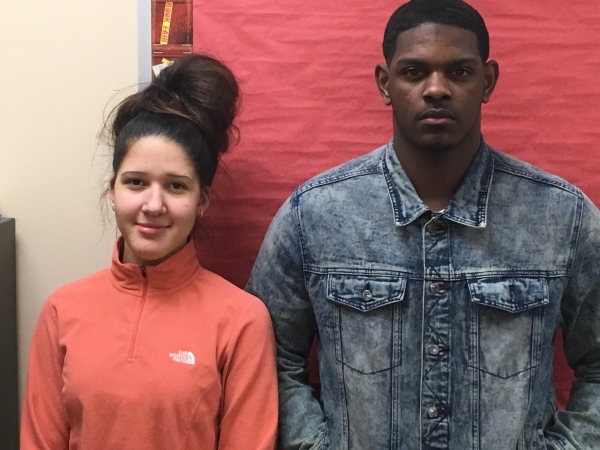 Alexis Buchanan and Billie Johnson Aaron Coleman, WAKR.
This week our 1590 WAKR Male Student Athlete of the Week is Billie Johnson, a junior basketball player from East.
He says that working with his teammates and coaches is something he enjoys and pushes him to be better day in and day out.
“Sometimes it's hard because some people don't like to listen, but we always come together and figure out what to do," he said.
He says head coach of the Dragons Brian Dawson gets the most out of him and his fellow basketball players and puts them in a position to succeed on the court and off.
“He always gets the best out of us," Billie explained.
Coach Dawson says Billie’s work ethic is contagious and that having him on the court makes a difference for East.
“He’s one of our post players and we need him to get a double-double for us (points and rebounds) which he usually does,” Dawson said
“Not only is he a great player, but a great kid as well, he goes to practice, he maintains a 3.0 GPA, he does the morning announcements in the morning, and on top of all that he goes to work, so he’s a well rounded young man.”
The three year letterman is not only a leader on the court, but also a leader in his school community, being a part of the Student Council.
Our next Female Student Athlete of the Week is Alexis Buchanan, a senior  basketball player from East.
She says she got into basketball from an early age and never looked back.
“ I used to look up to my male cousins when I was younger, I started playing when I was 8, and I wasn't too good, but I kept up with it and I'm on the varsity," she said.
In addition to being a basketball player and a  three year letterwinner, she is also a co-captain on the cheerleading squad.
Her head coach on the basketball team Darryl Anderson says she is a leader on and off the court.
“Alexis us a high energy; high quality young lady,” Anderson said.
“Alexis does our dirty work and she is one of the top rebounders and defenders on the team.”
Off the court, Buchanan exhibits a lot of good characteristics that make her a good basketball player.
“She is a leader at school and she is a positive role model to all of her teammates,” Anderson continued.
“Alexis is a young lady that her coaches and teammates can rely on.”
Buchanan said that working with her coaches and teammates is something she truly enjoys.
“Every year I like coming across more people," she explained.
Upon graduation in the spring, Alexis plans on attending Bowling Green State University to major in pre-nursing.
We wish Billie and Alexis the best in all of their future endeavors.
Read 2331 times
Tweet
Published in Student Athlete of the Week
Tagged under