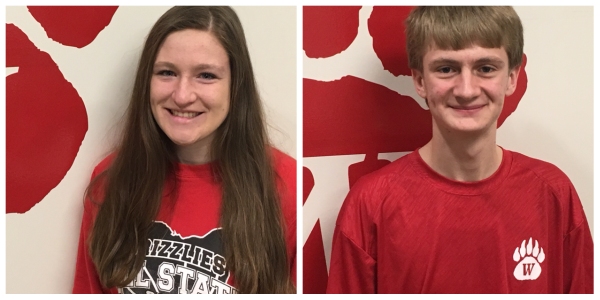 This week our 1590 WAKR Female Student Athlete of the Week is Kylee Beaty a senior basketball player from Wadsworth High School.

Kylee said she got into the sport of basketball at a young age and enjoys playing with her teammates.
“All the girls on the team are really close and we’re all best friends, so it’s great going to school with them and playing basketball with them,” Kylee said.
She says the coaching staff is supportive and pushes the girls to be the best athletes and people they can be.
“All the coaches on the team support us on a day to day basis, Batey explained.
Her head coach Andy Booth says Kylee is one of the hardest working players he’s coached.
“She moved from northwest Ohio as a freshman, she’s in her second year of varsity basketball, and she’s. earned everything,” Booth said.
“She’s a balanced player, can shoot the three and get into the paint and she’s quick and strong defensively,”
In addition to being a basketball player on the Grizzlies team, Kylee is a member of Advancement to Nursing and the Big Brother/ Big Sister program.
Upon graduation in the spring, Kylee plans on attending Lawrence Tech University to study nursing.
Our next Male Student Athlete of the Week is Eric Auffenberg, a senior bowler from Wadsworth.
He says bowling has been a part of his life since he was a youngster.
“I started bowling at a very young age, my parents got me into it when I was three or four years old and I’ve liked it ever since,” he said.
Eric’s a team captain and a four year letterman for the Grizzlies, and he says he leads both vocally and by example.
“I think it’s more vocal than anything else, because I can explain what to do with the teammates and help them out,” he said.
In addition to being a bowler for Wadsworth, Eric is a member of the National Honor Society, Band, and a statistician for the Grizzlies baseball team.
His coach George Steele says that Eric is one of the smartest bowlers he's ever been around.
"He comes from a bowling family, he understands the game so well, Steele said, "He's also a good kid and very coachable, what every coach looks for in an athlete,"
Upon graduation in the spring, he plans on attending the University of Cincinnati to study mechanical engineering.
We wish both Kylee and Eric all the best in all of their future endeavors.
Read 2535 times
Tweet
Published in Student Athlete of the Week
Tagged under