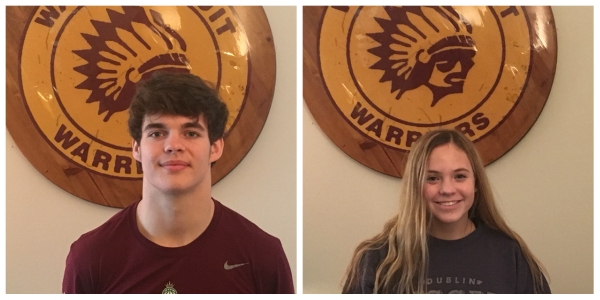 This week our 1590 WAKR Male Student Athlete of the Week is Tommy Cummings, a senior basketball player from Walsh Jesuit High School.

Tommy says he got into basketball in kindergarten and stuck with it ever since then growing up in the Macedonia area. He said that working with his coaches and teammates is special because of the grind of the season and the bond he developed with them over the years.
"It's really fun because you bond every day, you go through hardships together, and winning makes it just that much better when you're with your teammates and you become brothers," he explained.
His head coach Kevin Byrne talked about the leadership Cummings brings both on and off the floor.
"Tommy exemplifies everything we look for in our student athletes at Walsh Jesuit," he said.
"He is a great student, a great teammate, and most importantly a great person.  He is reliable, one of the most important things any person can be."
On the court, coach Byrne says he is just as dynamic.
Tommy has had an outstanding senior season for us and by  playing the point for a new coach, as a senior, is challenging for anyone" Byrne explains.
"Tommy has made it look effortless.  No one in the area plays harder.  It is contagious.  We remain a dangerous team to play largely because of Tom's ability to play both ends of the floor and be a threat on the offensive end, both with his scoring and his ability to make great decisions on when and where to throw his teammates the ball."
Upon graduation in the spring, he plans on studying engineering in college.
Our next 1590 WAKR Female Student Athlete of the Week is Kyra Dossa a gymnast and diver from Walsh Jesuit High School.
She says that balancing the two winter sports isn't easy but its a challenge she readily accepts.
"Gymnastics is definitely a priority because I've been doing it longer, but my two coaches communicate well and balance my schedule," she says.
Kyra says the community at Walsh is a welcoming one, and that makes going to school and going to practice a great experience.
This year has already been a great one for her as she placed 1st in the all-around at the Win The Day Invitational and 2nd in the all around at the McGee Invitational.
Her gymnastics coach Megan Crysler said Kyra is a true team leader even as a young underclassman
"She’s a hard worker everyday and pushes herself to be a better gymnast," she said.
"Not only is she an amazing gymnast, but she’s a kind, sweet, and funny person and I can’t wait to work with her over the next few years!  "
In her community of Sagamore Hills, she volunteers to coach her neighborhood swim team. In her spare time, she enjoys shopping and being with her family and friends. She enjoys the volunteer aspect to help out the next generation of swimmers.
"You get to help out the little kids and it's a lot of fun, she says.
We wish Tommy and Kyra the best in all of their future endeavors.
Read 3005 times Last modified on Thursday, 14 February 2019 14:45
Tweet
Published in Student Athlete of the Week
Tagged under