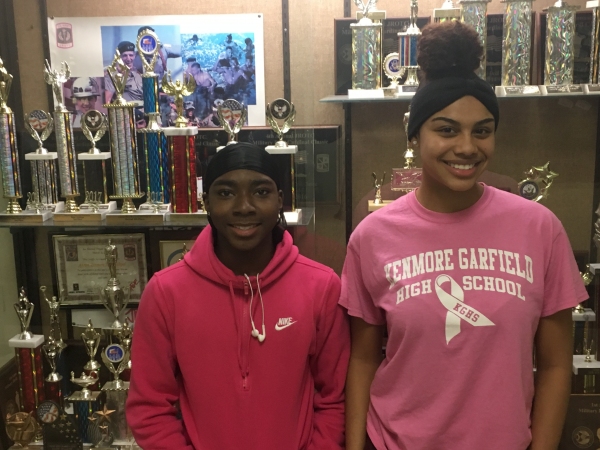 The 1590 WAKR Male Student Athlete of the Week from Kenmore-Garfield High School is Brandon Evans, a senior basketball player.

Brandon says he fell in love with the game of basketball at an early age.

"I just instantly had an interest for it, and I've played from 5 years old and I just never stopped," he said.

Brandon's a three sport athlete at Kenmore-Garfield with football, basketball, and cross-country.

He says the balance between academics and athletics is a tough, but managable one.

"School is always the first priority of mine, he said.

His coach Murray Hooten says Brandon's a leader on and off the court.

"Brandon Evans is a good student in the classroom and an amazing athlete on the court. He has an oustanding work-ethic that allows him to compete at a high level for us. Brandon leads by example and I wish we had him in our program for one more year. He will be a great asset to any college program he decides to play in."

Among some of the highlights for Brandon include being named  Player of the Month for December, an honor he was truly proud of.

"It felt good and it felt like my talents are being noticed and that my hard work and dedication has been noticed.

Upon graduation in the spring, Brandon plans on studying sports medicine.

Our next Student Athlete of the Week is Alexis Radcliff a senior basketball player from Kenmore Garfield.

She said she got into basketball at an early age and stuck with it ever since,

"I didn't get serious until my junior year, and then my senior year has been a great one for me.

Among some of the honors for Alexis this year, Academic All City, Player of the Year, and First Team All City.

Coach Yontami Jones had this to say about Alexis.

"We are truly going to miss our leader on and off the court!," she said.

"Alexis is like a daughter to me. I was truly blessed to have her as a player!!"

She says the best thing about being a student athlete at Kenmore-Garfield is the family atmosphere.

"I love the school and I love how we all support each other through everything.

Upon graduation in the spring, Radcliff plans on studying business management.

We wish Brandon and Alexis the best in all of their future endeavors.