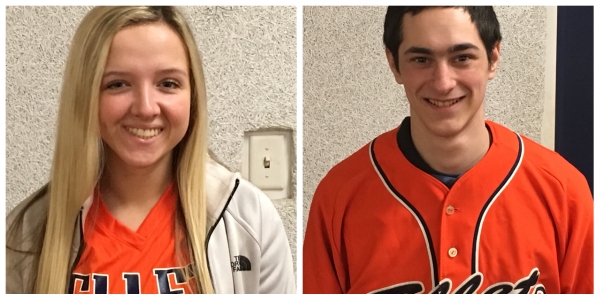 This week our 1590 WAKR Female Student Athlete of the Week is Syndie Wolf, a senior softball player from Ellet High School.

She said that she got into softball from an early age and with her family dynamic with her sisters playing and her grandfather coaching the team, it's been in her blood from the start.

"When I was five, I started going to games, and I always wanted to play, It was fun watching my sisters play," she said.

Sydnie is a three-sport athlete in softball, volleyball, and cheerleading. Among her accomplishments at Ellet, in volleyball she was an All City Honorable Mention, academic all-city performer and a three-year letterman.

She says her and her fellow seniors make practice fun and lighthearted.

"It's hard to explain, but it's always one of us," she says.

Her coach and grandfather Chuck Shuman says that Sydnie is a very hard worker on and off the softball diamond.

"I respect her for the time she puts in," Shuman said. "She does everything I ask, we're going to ask her to pitch some this year."

Despite having fought through some injuries over the years, she shown hard work and dedication.

"She never misses a day, she's a very dedicated athlete, and we appreciate the effort that she gives us."

Upon graduation in the spring, Sydnie plans on attending the University of Akron or Ohio University to study Biology and Pre-Med.

Our next 1590 WAKR Student Athlete of the Week is Josh Jaeger a senior baseball player from Ellet.

He always enjoyed the game of baseball growing up and says he enjoys working with his coaches and teammates at Ellet.

"It's just a fun experience having to learn and be able to make yourself better with other people and share experience with everyone around you," Jaeger said.

His coach John Sarver talked about his versatility and work ethic.

"Josh Jaeger is one of our hardest workers. He can play multiple positions, including pitching.," he explained.

"He is very coachable and one of our best hitters. He seems to play his best in the most important games."

Upon graduation in the spring, Josh plans on attending Thiel College in Greenville, Pennsylvania to play baseball and study Biology.

We wish Sydnie and Josh all the best in all of their future endeavors.