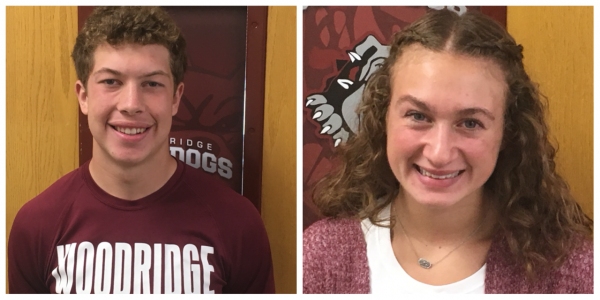 This week our 1590 WAKR Male Student Athlete of the Week is senior football player Ben Lahoski from Woodridge High School.

Ben says football has always been a family thing for him growing up and all the way into his senior season.
“My grandpa played, my dad played, and it’s just always been a part of me,” he said.
Ben’s coach Jeff Decker says that he is one of the smartest players he’s ever been around.
"He is an outright team leader,” Decker explained.

“All of the kids look to him, and he’s the hardest worker and he knows every position on offense and defense if we asked him to play it.”

Ben plays linebacker on defense and serves as a running back on offense.

He’s a two-sport athlete playing both football and basketball at Woodridge. One of the unique aspects is playing on Lahoski Field, named after his grandfather.

Away from the field, he’s a member of the National Honor Society and is active in the community as well.

Upon graduation in the spring, Ben is undecided on where he is going to school, but plans on majoring in Business.

Our next Female Student Athlete of the Week is Sarah Abood, a junior volleyball player from Woodridge High School.

She says that she got the love for volleyball in middle school and stuck with it ever since.

“i originally got it from my grade school at IHM (Immaculate Heart of Mary in Cuyahoga Falls), and we started out with CYO and then I got into travel volleyball and tried out for the high school team," she said.

Her coach Katie Cicione says that Sarah is a true leader both on and off the court.

“Sarah is one of the most hard working athletes that we have within our program,” she says.

“Every day  she strives to be the best version of herself possible for her teammates, constantly asking questions and always the first person one of our underclassmen go to.”

Among her many activities and clubs s, one of the most notable is the Woodridge Athlete Leadership Council.

She says that the number of athletes encouraging and helping one another is critical to success on and away from the playing field.

“I enjoy being a part of that club, it pushes me to be a better leader every day," she explained.

We wish Ben and Sarah all the best in their future endeavors.