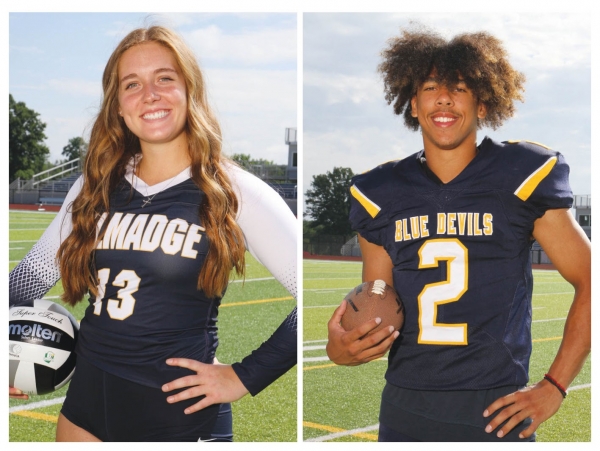 Collin Dixon
Collin Dixon is a three sport athlete, participating in Football, Basketball, and Track. In football, he is a Senior Team Captain and 3 year letter winner. He has been named to the 1st team Suburban league 3 times, 1st team district twice, 1st team All Ohio twice and NEO Inland District D3 OPOY once.

In basketball, he is a 2 year letter winner and has been named to the 1st team Suburban League twice and 2nd Team District once.

In Track, he is a two year letter winner and has been named to the 1st Team Suburban League twice.

Collin is an outstanding role model and student in our school. He holds a 4.07 GPA He is part of Senior Class Executive Committee and is a regular in the stands of the sports he isn't competing in. Collin has opened his recruitment back up for football after a coaching change at Wisconsin, where we had previously committed to.

Maya Dexter
Maya Dexter is a two-sport athlete, competing in volleyball and basketball. She serves as a captain on the volleyball team and has earned many accolades during her time with the team:

In basketball, Maya is, to this point, a 3 year letter winner. She also serves as a captain, along with the following honors:

Off the court, Maya holds a 4.41 GPA and is involved in Leaders in Action, Student Senate, Class Officers, Pep Club and National Honor Society. She is an extraordinary citizen of Tallmadge High School and proud to have her walk our halls. She is undecided on her college choice and if she wants to continue her athletic careers at the next level.

The Student Athlete of the Week segment is powered by NECA-IBEW and Akron Children's Hospital.