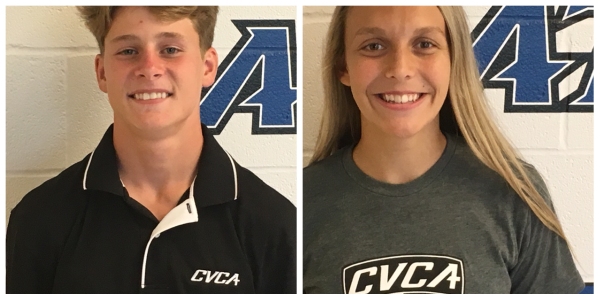 Our 1590 WAKR Male Student Athlete of the Week is Caden Scarbrough , a  junior golfer from CVCA.

He says he got into the sport of golf at an early age.
“My Dad is really big into golf, so he’s just been with me pretty much my whole life, just being involved in golf, so my dad got me hooked on golf,” he said.
Caden said that the family atmosphere at CVCA has helped him both on and off the golf course, enriching his experience as both an athlete and a student.
“The teachers here are nice and are there to help you any way they can,” he said.
His head coach says that he is one of those kids that makes others around him better.
"Caden is extremely committed in making his teammates better in all areas of their lives, says coach Jon Bucciarelli.
Scarbrough says that he models his game after PGA golfer Justin Thomas, who may be smaller in stature, like he is, but can drive the ball a good distance.
“He’s really awesome to watch,” Scarbrough said with a smile.
Head Golf Coach Jon Bucciarelli says that Caden is a student athlete in every aspect of the term.
"Caden is truly the leader of our golf team in every aspect," he says. "His work ethic, integrity, and spiritual discipline resonates with his fellow teammates and opponents."
Our next Female Student Athlete of the Week is junior Payton Fraley a soccer player from CVCA High School.
She says working with her coaches and teammates is something she truly enjoys.
“Its just amazing environment,” she explained. “We strive to be better every single day,” she said.
Payton points to a leadership class she’s currently taking at CVCA this fall that is giving her the tools she needs to lead on the pitch.
“You have to represent yourself and you don’t always have to be vocal, you can do it through your actions and how you love others,” she said.
Head Coach Courtney Wagner had this to say about the junior;
"Payton is wonderful kid and a tremendous teammate. She brings lots of joy and energy to the team," she explained.
"She represents the Royals very well and we are excited to see her continue to grow."
Payton says she got the love of the game of soccer from her older brothers, who also played the sport.
“I was always hanging out with them and I always wanted to play.”
Outside of her leadership class, Fraley’s favorite subject is math.
We wish Caden and Payton the best in all of their future endeavors.
Read 1643 times Last modified on Friday, 13 September 2019 15:05
Tweet
Published in Student Athlete of the Week
Tagged under