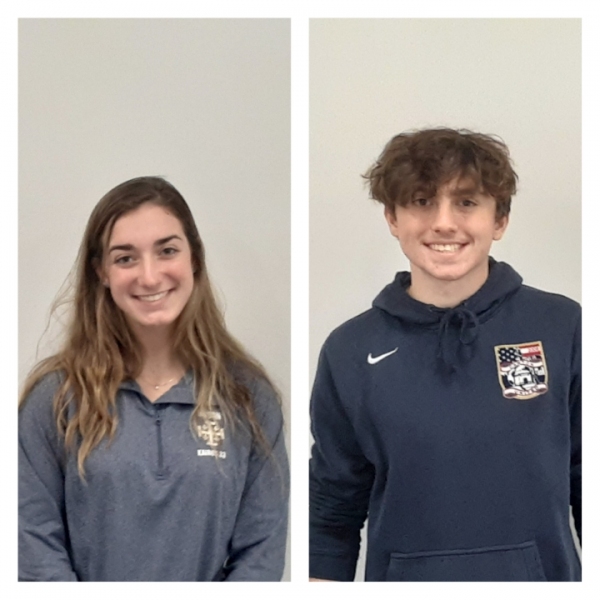 This week our 1590 WAKR Female Student Athlete of the Week is Samantha Huth, a senior golfer from Archbishop Hoban High School.

She says that her father got her interested in the game of golf at an early age and she carries that appreciation for the game to this day.

“My dad was a golfer and he's been around it his whole life, and when I was trying to figure out what sports work best for me, I started taking lessons at 9 and have been at it ever since," she said.

Huth says the family atmosphere at Hoban extends beyond the golf course for her.

"Since my freshman year at Hoban, it's honestly been amazing," she said. "The best part about it is just the fact that you can say hi to anyone here and be automatic friends."

In 2019, she was named the captain of the girls golf team, lettered for the fourth year in a row, and was a second place medalist at the NCL Championship earning first team honors.

Her coach Ben Wehmann said that she is a great example for the girls on the golf team and an exemplary student athlete.

In my eight years coaching, Sam stands out among a select few as one of the most motivated individuals I have ever had," he said. "The other girls looked up to her and respected her not only as an excellent golfer but as a leader and a friend and her dedication to the sport was obvious as she was often found outside of team practice working on her game with her dad and teammates."

Away from the course, Huth is a student ambassador, a member of the National Honor Society, and a Peer Mentor.

In the community, she volunteers at Common Threads and also at Summit County Animal Control.

Upon graduation in the spring, she plans on attending Clarion University to study nursing.

Our next Male Student Athlete is Dylan Farah, a senior soccer player from Archbishop Hoban.

He says soccer has been a big part of his life from an early age.
"My older brothers got me into it and ever since I can remember I've had a ball at my feet," he said.
2019 was a solid one for him as he scored 9 goals and had three assists his senior season. He was also named to the NCL First Team and was named GASCA Akron District Honorable Mention.

His coach Tavi Muresan says he is a leader in every aspect of his life.

He is an excellent soccer player who always plays with an outstanding passion at a high level," he explains . "He was one of our most dynamic and unpredictable attacking players who played a vital role in helping Hoban Knights to win North Coast League on three times in his soccer career."
Muresan went on to say he's as good of a young man as he is a soccer player.
"Dylan was a great role model for all our players playing almost all his senior year with an ACL injury , scored important winning goals and showed immense character."

In the community, he volunteers for the All Star Training Club and South Street Ministries.

Dylan says both of those opportunities are rewarding for him in unique ways.

“”
Upon graduation in the spring of 2020, he plans on attending The Ohio State University majoring in Finance.

We wish Samantha and Dylan the best in all of their future endeavors.