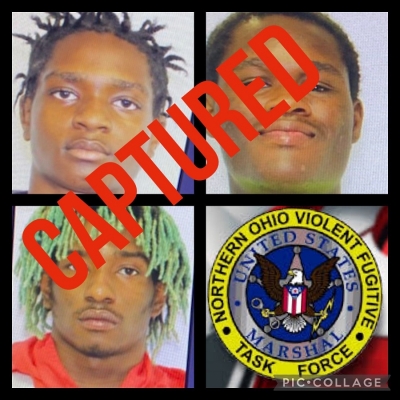 Akron Police and the U.S. Marshals Northern Ohio Violent Fugitive Task Force announcing the arrest of three men in connection to the brutal murder of 17-year-old Ethan Liming back on June 2nd.

This past Saturday morning, U.S. Marshals and Akron Police arrested 19-year-old Tyler Stafford, 20-year-old Deshawn Stafford Junior, and 21-year-old Donovon Jones - all three who are now charged with murder and felonious assault. Deshawn and Tyler Stafford were arrested at ahome in the 500 block of North Howard Street in Akron, while Jones was arrested at a home in the 200 block of Crosby Street in the city.

In a statement made shortly after the arrests on Saturday, Akron Police Chief Steve Mylett noted that "While... the news of the arrests will be welcomed by Ethan's family and loved ones, we... recognize nothing will bring Ethan back." The Chief went on to say, "Violence in this country must stop. We are losing too many lives to senseless acts of violence." Mayor Horrigan noting that "these arrests would not have been possible without the dedication of... the Akron Police Department... and the U.S. Marshals Northern Ohio Violent Fugitive Task Force."

On Sunday, the parents of Ethan Liming told News 5 they would not comment on the arrests in the case, but instead would like to focus on the memory of their son, Ethan.

"Ethan's senseless and tragic death has touched every person in our community,” said Akron Mayor Dan Horrigan. “These arrests would not have been possible without the dedication of our Akron Police Department and their collaboration with the U.S. Marshals Northern Ohio Violent Fugitive Task Force. They have worked around the clock on this case and I thank them for their tireless efforts. My thoughts and prayers remain with the entire Liming family at this time."

Akron Police Chief Stephen Mylett added, “I am happy to report that today, officers with the Akron Police Department, made several arrests in connection with the death of Ethan Liming. We thank the members of the community for their outpouring of support that helped investigators throughout this investigation. We will continue to follow any leads that will result in bringing those responsible for Ethan’s death to justice. While I believe the news of the arrests will be welcomed by Ethan’s family and loved ones, we all recognize that nothing will bring Ethan back. Violence in this country must stop. We are losing too many lives to senseless acts of violence.”

U.S. Marshal Pete Elliott stated, “The U.S. Marshals Service will continue to provide all necessary resources to help our partners at the Akron Police Department to combat violent crime. This crime impacted an entire community and we stand alongside the community in seeking justice for Ethan.”