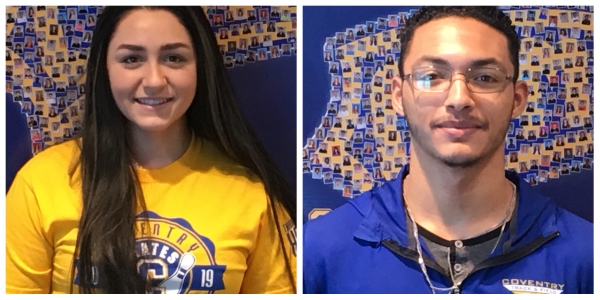 This week our 1590 WAKR Female Student Athlete of the Week is Savannah McGraw, a senior bowler from Coventry High School.

She says she got into bowling to have another challenge for herself and to compete alongside her friends.
“I just thought it would be cool and something to do with my friends, and over time it just became something that I love to do," she says.
She says working with her coaches and teammates is something she truly enjoys.
“It is just a lot of fun and being with your friends," she explained.
McGraw is a three sport athlete competing in volleyball, bowling, and track. In addition, she was part of the all-district team in bowling in 2018-19.
In addition to being a three sport athlete, Savannah is a member of the National Honor Society and the Key Club.
Her coach Aaron Rose talked about her leadership and competitive nature.
“Savannah is a competitor that does not like to lose,” he said. “She is hard working and is always trying to get better and it has been a pleasure to coach and teach such an outstanding student and athlete.”
Upon graduation in the spring, McGraw plans on studying Criminal Justice at Gannon University.
Our next Student Athlete is Nolland Almestica a senior track and field athlete from Coventry High School.
He says competing in track has been a passion of his since his middle school days.
“I started track in eighth grade and it was difficult to get it started  because of athsma," he said.  "But when I started I had this rush of adrenaline and it felt like I was meant to be on the track."
Nolland is a three year letter heading into his senior year, competing in the middle distance events such as the 800 meter dash and the 4x800 and 4X400 relay.
He says working with his teammates and communication is essential to success on the track.
Track Coach Danny Savage had this to say about his star senior.
“Nolland is an amazing young man who is every coach's dream,” Savage explains.
“He is one of the hardest working athletes I've ever seen but still finds the time to succeed in the classroom and community. “
In addition to being a track athlete, Almestica also participates in Marching Band, Symphonic Band and is a member of the National Honor Society.
Upon graduation in the spring, he plans on attending the University of Akron and majoring in Political Science.
We wish Savannah and Nolland the best in all of their future endeavors.
Read 1796 times Last modified on Friday, 08 March 2019 07:42
Tweet
Published in Student Athlete of the Week
Tagged under