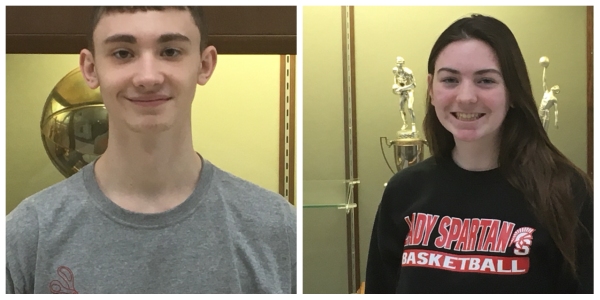 This week our 1590 WAKR Student Athlete of the Week is Shae Moles, a senior basketball player from Springfield High School.

He says he got into basketball at an early age and kept it going ever since.

"Football was my first love for any sport, but once I started playing in youth and got up to junior high, I just fell in love with the game," he said.

He says working with his teammates and coaches has been a truly rewarding experience over the course of his career as a Spartan.

His head coach Tim Cole said Shae's hard work is apparent on the court and in the classroom.

"Shae is a perfect example of what we want a Spartan Basketball player to be," Cole says. "He works really hard in the classroom, volunteers in the community, and excels in all parts of the game on the floor. He never misses practice, works hard in the offseason, and is a leader for both his senior teammates and underclassmen alike. He leads a small-cell group of underclassmen and has taken them under his wing to teach the next generation ‘The Spartan Way’.“

"They (coaches and teammates) help you each step of the way," he explained.

Shae' s a three year letterman and was 2nd team All-PTC and participated in the PTC All Star Game. He's also showing excellence in the classroom as well, with a 3.4 GPA and participation in such extracirriculars such as senior council.

In the community, Shae serves as a referee for youth sports basketball games in the area.

Upon graduation in the spring, Shae plans on majoring in either education or physical therapy.

Our next Student Athlete of the Week is Natalie Phillips, a junior basketball player from Springfield High School.

"My brother did it and I started it because I wanted to try something new.

Phillips is a two-sport athlete at Springfield in both basketball and cross country all while maintaining a 3.6 GPA.

Her head coach Kevin Pletcher has this  to say about one of his leaders.

“Natalie loves the game of basketball, she loves being part of the girls basketball program,” he said. “She represents herself first class as a student-athlete here in the Springfield school system and community."

She said one of the cool aspects of playing basketball for the Lady Spartans includes playing at the Q (Quicken Loans Arena) during the course of her career.

"We go every two years, so that's pretty unique," she says.

Phillips is a 3 year letterwinner in basketball heading into her senior season in 2019-20.

We wish both Shae and Natalie the best in all of their future endeavors.