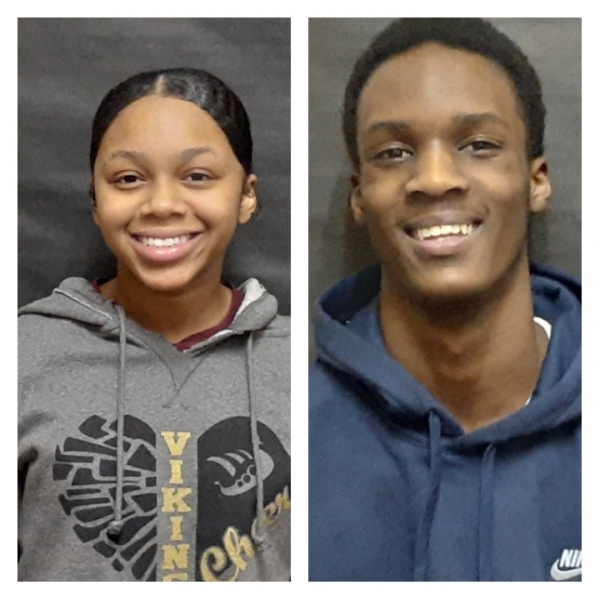 This week our 1590 WAKR Student Athlete of the Week is Amicia Powers, a senior indoor track athlete from North High School.

Powers is a three sport athlete competing in volleyball, indoor track , and track and field (outdoor)

She says that the balance between academics and athletics is a tough one, but very doable once you get a hold of time management.

"I balance it by getting my schoolwork done first before practice and our coaches let us get our work done so we can focus during practice," she said.

Coach Demonte Powell says Amicia has been the vocal and physical leader since her first day of practice.

“She understands without self discipline success is impossible and she carries one of the highest gpa's on the team yearly,” he said.

“She's an athlete that keeps me going and constantly makes me work hard. When she finally leaves it will be a big loss losing such a leader and a team player we in the staff love Amicia dearly and wish her nothing but success .”

In addition to being a three sport athlete, Powers is also a member of Skills USA, the Senior Advisory Board, Viking Voices, and the cheerleading squad.

She says that being a student athlete at North is an honor and a privilege, especially with the international students, many of whom she has grown to be friends with.

"I think it's good to know where they come from in certain situations," she said.

Also in the community, she volunteers at the Haven of Rest in Akron, something that she takes pride in as well.

Upon graduation in the spring of 2020, she plans on attending either the University of Akron or Kent State University to study Biology/Pre-Med.

Our next Male Student Athlete of the Week is Elijah Humphrey, a junior basketball player from North High School.

He says he got into basketball at an early age.

“ I always played since I was little, I started in rec league in third grade, and I just came up from there," he said.

Humphrey is a two sport athlete competing in both basketball and track and field and both are beneficial to his conditioning.

“It's just easier for me to get up an down the court,"

In addition to being playing two sports for the Vikings, Elijah also is a member of DECA and Viking Voices.

Coach Marc Smith had some good things to say about Humphrey.

"He has some good leadership qualities that has helped us improve as a program.  He is a member of DECA and has already earned scholarship   through that organization," he said.
"He has been playing all year with injuries but is still our 2nd leading scorer, best FT shooter, and arguably our best rebounder.  There is no doubt that if he stays focused, he will be a dynamic individual that will have a major impact on his family, community, and profession."

For community service, Humphrey also volunteers at the Haven of Rest in Akron. He says giving back to community is something he enjoys and realizes the importance of.

We wish Amicia and Elijah the best in all of their future endeavors.