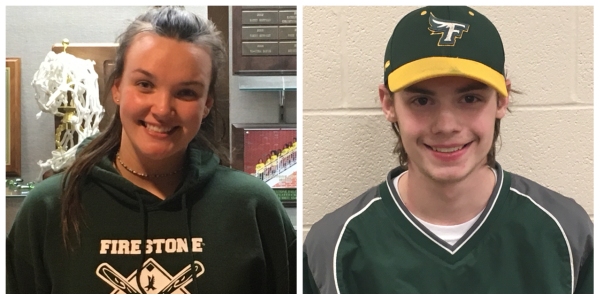 This week our 1590 WAKR Female Student Athlete of the Week is Mary Rohrer, a senior softball player from Firestone High School.

Mary said softball was something she got into from an early age and it has stuck with her ever since.
“My parents put me in it, I liked it and stayed with it,” she said.
She’s a two sport letter athlete in both soccer and softball in addition to being in the choir, the school musicals and dance.
Her softball coach Joe Moxon said that Rohrer exhibits great leadership both on and off the field.
“Mary is an exceptional student athlete who is very well rounded. She excels in the classroom, on the stage and leads on the field in practice and games,” he said.
“She is one of the hardest working players that we have. She is very well liked by her coaches & teachers, teammates and peers.”
Upon graduation in the spring, Mary plans on attending Ohio University and majoring in business.
Our next  male Student Athlete of the Week is Max Erisey, a senior baseball player from Firestone High School.
He says he’s been engrained in the game of baseball from an early age.
“My older brother got me into it, he played, my dad played for Firestone, and it's been a family thing," he said.
He's been a four year letterman and a 2-year captain at Firestone and he's enjoyed every minute of it.
He says being a student athlete at Firestone has been a true honor.
"To be able to represent Firestone, the green and gold, it's nice."
Coach John Sloan talked about his prowess both in the classroom and on the field.
"He has a 3.8 gpa and a 30 on the ACT in addition to being  a member of the soccer, bowling and a 4 year starter on the baseball team," he said. "As a person he is an extremely polite people person. He has been a co captain and this year the sole captain of the baseball team. He is a student amabassador of the Lebron James Family Foundation."
Upon graduation in the spring. Erisey plans on studying anthropology at the University of Akron.
Read 2903 times Last modified on Tuesday, 02 April 2019 16:03
Tweet
Published in Student Athlete of the Week
Tagged under