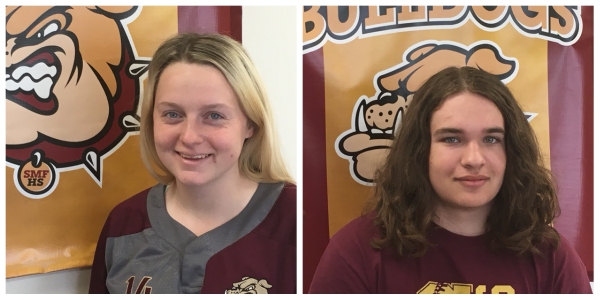 This week our 1590 WAKR Female Student Athlete of the Week is Jenna Stout, a senior softball player from Stow-Munroe Falls High School.

She says she got into softball early on in her life and stuck with it ever since.
“Softball’s always been my thing,” she said. “Ever since t-ball.”
Her coach Allison Lewandowski says that Jenna is a true leader on and off the field.
“She is an outstanding student athlete with at 3.8 cum GPA,” she explained.
“She is able to balance school, softball and working and does a great job at it,” Lewandowski continued.
“We are truly grateful to have such an outstanding leader on our team.”
In addition to being a softball athlete, starting at 2nd base, she’s also involved in the health careers career program at the high school.
Stout says the medical field is always something she’s been interested in.
“I’ve always wanted to do something with nursing and my junior year I got accepted into the program,” she said.
“It’s a step forward.”
When she’s not busy with work, school, or softball, she’s volunteering at local animal shelters and at the Haven of Rest.
Upon graduation in the spring, Jenna plans on attending either Mount Union or Kent State to study nursing.
Our next Student Athlete of the Week is junior baseball player Adam Folk of Stow-Munroe Falls High School.
Adam says he grew to love the game of baseball from his mother at an early age and has always enjoyed the sport.
“I’ve been playing as long as I can remember,” he said.
“My mom more than anyone really got me into it, and she’s pushed me to play this long and at as high of a level as I can.”
His coach Aaron DeBord says that Folk is a great leader on and off the diamond.
“He was unanimously picked as a junior captain  and is the unquestioned leader in our outfield,” DeBord said.
Coach DeBord says his ability to be a good teammate is a great characteristic that he possesses.
“Adam seems to always know what to do or say to help get a friend out of a funk and make them feel better and more energized,” he says.
Folk says he takes his role as a teammate and captain seriously.
“I just want everyone to keep their head up at all times so we can play to the best of our ability.”
Away from the field, Adam enjoys spending time with family and friends.
We wish Jenna and Adam the best in all of their future endeavors.
Read 2914 times Last modified on Friday, 12 April 2019 07:47
Tweet
Published in Student Athlete of the Week
Tagged under