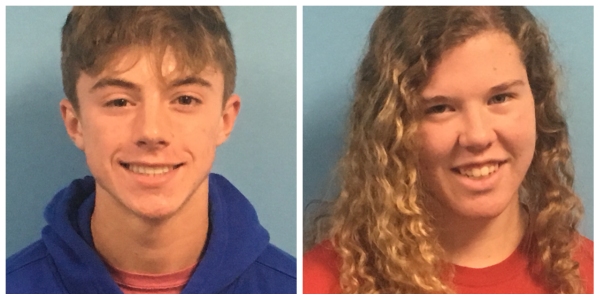 This week our 1590 WAKR Male Student Athlete of the Week is Joey Klein, a junior soccer player from Revere HIgh School.

He says that soccer has always been a part of his life from an early age.
“I’m pretty sure it was my parents that forced me to do it,” he said with a laugh. “I’m really happy they did and I’ve enjoyed it ever since.”
This year he was nominated as a team captain for the varsity team and was also chosen by his peers for the Athletic Leadership Council.
As a two sport athlete in soccer and track, Joey says being a Revere Student Athlete is something special.
“I just feel proud, “ he said. “The years before us set such a precedent of winning and to be a leader and a captain is a great feeling.”
Away from the pitch, Joey is a member of Student Council as well as Class Council.
He also spreads his love of the game of soccer to youngsters in the community by coaching and refereeing for the Revere 2nd Grade Academy.
His coach Nick DePompei says Klein exemplifies what a Revere Student Athlete should be.
“Joey is a gifted leader on and off the field.  He understands how to work with his teammates and get the best out of them,” he said.
“Joey has always been about his team first and does an amazing job making them better on the field. Whatever is asked of him on the field he is willing and capable to handle it.”
Our next Female Student Athlete of the Week is Alanna Ramsey a senior volleyball player from Revere High School.
Volleyball has been a part of her life from an early age, and she enjoys it each year.
“Honestly my whole family played volleyball and pushed me into it but I’ve had zero regrets going into volleyball,” she said.
As a two sport athlete participating in both volleyball and track, she says that the community and her fellow students support the athletes across all sports
Outside of sports, Ramsey is a part of Student Council and Yearbook.
Her coach Dana Cummins says she is an example for all of the younger players and a true team leader.
“She would run through a wall for me and her teammates. She works hard every day and is a true competitor. She brings the energy, that the other players feed off of,” she said.
“Alanna is a great kid, always brings laughter each day and well liked by her teammates and It has been a pleasure coaching her the past 4 years. “
Upon graduation in the spring, Alanna plans on studying Criminal Justice.
We wish Joey and Alanna the best in all of their future endeavors.
Read 1401 times Last modified on Thursday, 03 October 2019 14:25
Tweet
Published in Student Athlete of the Week
Tagged under