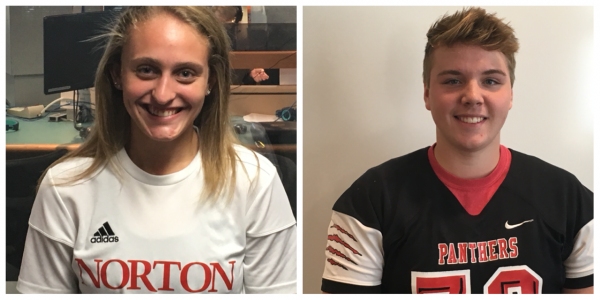 This week our 1590 WAKR Female Student Athlete of the Week is Allison Spears, a senior soccer player from Norton High School.

She says that being a Norton Student Athlete is something truly special.

“Going to practice every day and just smiling and laughing and walking through the halls and seeing my teammates every day.”

In 2019, she was named a team captain and was also a recipient of the PTC Scholar Athlete Award. She says that leadership is a dual role for her as she leads by example and vocally out on the pitch.

“It just depends on how the game is going,” she said.

Her coach Dan DiPasquale says that Spears exemplifies what you’re looking for in a student athlete.

“Allison is a soccer player that I first noticed when she was in the 8th grade! “ he says.

“Her dedication & hard work has made her into the amazing soccer player, leader & mentor that she is today, and I am very proud of everything she has accomplished!"

Upon graduation in the spring, Allison plans on attending the University of Akron to study Pre-Med.

Our next Male Student Athlete of the Week from Norton High School is Tim Jervis, a senior football player.

Tim says the atmosphere for Norton and their student athletes is second to none.

“It’s nice because it’s a small community and everyone supports you,” he said

His coach Kevin Pollock said he’s a great young man both on and off the field.

“Great kid, Great grades, and huge impact for us on both sides of the ball,” Pollock explained.

Tim is a two sport athlete for the Panthers playing along the offensive and defensive line in football and throwing shot and discus on the track and field team during the spring.

When not studying or playing sports, Tim is a member of the Spanish Club and a member of Superintendent Advisory Group. In addition to those activities, he also works at the Wadsworth YMCA.

He is currently undecided on where he will attend college in the fall of 2020, but he says he wants to get into the medical field.

We wish Allison and Tim the best in all of their future endeavors.