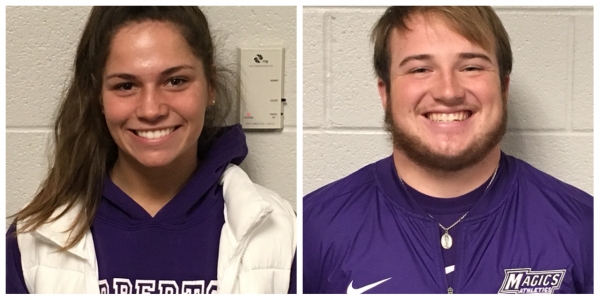 This week our 1590 WAKR Female Student Athlete of the Week is Alexis Mayle, a senior volleyball player from Barberton High School.

She says that working with her coaches and teammates is something she truly enjoys.
“It's fun," she says. " "It means the world to me to be as close as I am with them."
Alexis is a two sport athlete for the Magics playing volleyball during the fall and softball during the spring. She says that the balance between academics and athletics is a tough one, but necessary.
“I take my schoolwork very seriously, " she explains.
Among her accomplishments, she is a three year varsity letter winner in volleyball and will be a four year letter winner in softball, garnering Suburban League 2nd team honors as a junior.
Away from the athletics, Mayle is a member of the Math team and works at a local restaurant in the Barberton area.
Her volleyball coach Nick Williams discusses how she leads both on and off the court.
“It has been pleasure coaching Mayle these past four years! Lexi brings a fiery, determined, hard-working and fun attitude to the game, that not only the team respects and loves, but the coaching staff does as well,” he said.
“Her hard work and bubbly personality will be missed tremendously by everyone. “
Our next Male Student Athlete of the Week is Tyler Eberhart, a senior football player from Barberton High School.
Tyler says he grew to love the game of football from an early age.
“I first started loving football as soon as I started playing," he said. "I just fell in love with it immediately."
He says as a two time captain, leadership in all forms is important.
“This year as a senior it's a little more vocal and still leading by example."
Tyler is a two sport athlete in both football and track and field. In addition to being a letterman in both of those sports, he is also a member of the National Honor Society, Math Club, and Student Council.
Coach Tony Gotto has this to say about Eberhart, one of the leaders on the field and in the locker room.
“I asked the team one day of who our overall leader is and it was unanimous,” he said of Eberhart.
He does every community service and has incredible work ethic.” And
In the community, Eberhart works at Barberton Local Tees and is also involved with his church, Barberton First Baptist.
Upon graduation in the spring of 2020, Tyler plans on studying mechanical engineering. He is currently undecided on where he will attend school, but has been offered by both Case Western Reserve and Valparaiso to continue to play football.
We wish Alexis and Tyler the best in all of their future endeavors.
Read 1921 times Last modified on Monday, 21 October 2019 21:58
Tweet
Published in Student Athlete of the Week
Tagged under