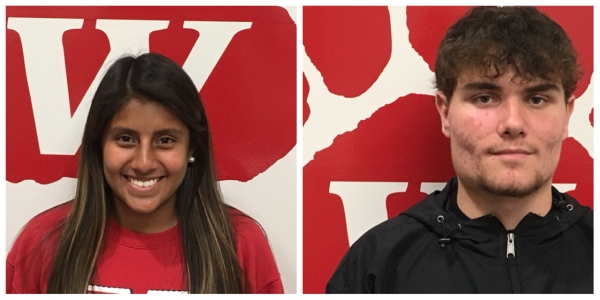 This week our 1590 WAKR Female Student Athlete of the Week is Gabriela Heideman, a senior tennis player from Wadsworth High School.

She says she got into the love of tennis from an early age and hasn't stopped since.

"I started when I was 9,  my dad got us a couple of rackets, we started playing in the driveway and I started getting lessons soon thereafter, and it just grew," she explained.

Among her accomplishments her senior year, Heideman finished 23-9, breaking her own school record in addition to finihing 3rd in the Suburban Leauge, finishing as a runner up in the sectional tournament and qualifying for the district tournament.

Her head coach Kristy Nichol also discussed how Heideman excels not only on the tennis court, but in the classroom and in the community as well.

"She is extremely dedicated to the game and loves to play tennis,” she said.

“Every day, Gabriela set the example, and girls on the team looked up to her for motivation and I am excited to watch her continue her tennis career in college.”

Outside of school, she spreads her love of the game through volunteering at tennis camps in Wadsworth.

"It's a great chance for me to grow as a teacher, and help kids love the game just like I did," Gabriela said.

While she is undecided on where she will attend college after graduation in the spring of 2020, she plans on majoring in education.

Our next 1590 WAKR Male Student Athlete of the week is senior football player Trey Shaffer from Wadsworth High School.

He says that being a Grizzly student-athlete has been a fantastic experience for him.

"We have a ton of pride, and it's really awesome playing here because everybody supports everybody," he says.

Justin Todd, the head coach of the Grizzlies had this to say about his senior quarterback.

"Trey continues to be a great leader for our program and is playing his best football now, when it’s needed the most,” Todd explains.

“His maturity and demeanor is exactly what you look for in the QB position, never too high or too low, he’s a calming voice in the huddle and on the sideline.”

Shaffer says that being the quarterback, there comes with a lot of expectations and knowledge of all the variables on the field, but having that familiarity with his seniors has been special.

"We've pretty much all been playing together since we were eight years old," Trey said. I really think that our best football is ahead of us, and it's great to go to work with not only the seniors but the rest of our guys, it's been fun to see."

Away from the field, Trey is a member of the National Honor Society, Student Council, and the Recycling Club among other activities.

He is currently undecided on where he will continue his education, but he plans on majoring in either Political Science or History.

We wish Gabriela and Trey all the best in all of their future endeavors.