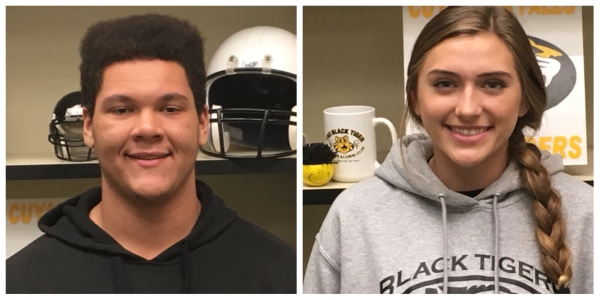 This week our 1590 WAKR Male Student Athlete of the Week is Donovan Mills, a senior football player from Cuyahoga Falls High School.

Donovan says he came into football later on in his life, but has enjoyed every step along his journey.
“I only started playing my freshman year, they let me develop, and I've been on varsity the last three years," he said.
He says that his head coach Shane Parker has been an influential person in his life on and off the field.
“He's been like a father figure to me," Mills said. "He pushes me on and off the field, and I'm just happy to play for him every Friday."
Coach Parker says Mills exemplifies what a Black Tiger is in all facets of being a student athlete.
“He is a leader on and off the field, he is someone who embraces the chase every single day and isn’t afraid to do the work,” Parker said.
“His work ethic, moral fiber, and leadership abilities are uncanny and second to none. “
Away from the field, he’s involved in a mentoring program for kids at Silver Lake Elementary School, something he truly enjoys.
Our next Female Student Athlete of the Week is Kaylie Ward, a senior soccer player from Cuyahoga Falls High School.
She says that the support from the student body and staff make being a Black Tiger student athlete something special.
“Everyone in the community, all the parents on the team, they just come around and support the team," she says.
This year on the pitch she garnered First Team All District honors, first team All Suburban League honors and was named a team captain.
She said she enjoyed the camaraderie with her teammates over her time with the Falls.
“We're all just one family," she says.
Her coach Greg Shoults talked about how she’s a leader in the classroom, on the field, and in the community.
“"Kaylie is a great leader for our team," he says.
"She trains hard and plays with tremendous intensity in games, she has played a huge role in the improved success of our team this past season."
Ward is a member of the Business Professionals of America, Fellowship of Christian Athletes, and the Ineract Club.
Upon graduation in the spring, she plans on studying Sports Management at the University of Indianapolis in hopes of becoming an athletic director.
We wish Donovan and Kaylie the best in all of their future endeavors.
Read 1991 times Last modified on Thursday, 31 October 2019 16:40
Tweet
Published in Student Athlete of the Week
Tagged under