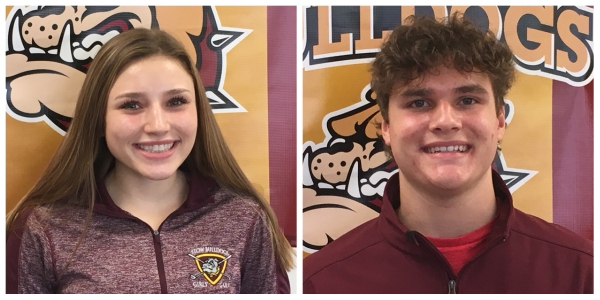 This week our 1590 WAKR Female Student Athlete of the Week is Ellie McCoy a junior golfer from Stow-Munroe Falls High School.

She says that being a Stow Student Athlete is a special part of her experience, saying that the athletes all support each other, no matter what the sport.
“You are friends with other student athletes and they help you with your schoolwork and other school activities,” she said.
Ellie was the Suburban League Player of the year in 2019 and made it to sectionals as well.
She says that she models her game after LPGA Golfer Lexi Thompson.
“She’s a good role model for women’s golf and I like her game a lot,” she explained.
Her coach Scotte Rorabaugh said Ellie is a leader in many ways and exemplifies what a Student Athlete is.
“Ellie is a student-athlete in every sense of the word,” Rorabaugh said.
“Her leadership skills are only exceeded by her work ethic which is unparalleled in both the classroom and on the golf course and clearly evident by her success as one of the best students in her class and one of the top golfers in northeast Ohio.”
In addition to being a golfer, she also plays basketball at the school and is part of DECA and is the Junior Exec Committee Vice President.
For volunteer work, she along with a group went to Fiji and taught English to the folks there and helped build a water tank and helped create a food bank.
Our next Male Student Athlete of the Week is Clayton Mosher a junior football player from Stow- Munroe Falls High School.
He grew to appreciate the game of football as a youngster and has loved it ever since.
“I started playing tackle football in third grade and I played every year since then, and I love everything about it, from the first game I played to the first practice,” he said.
Mosher is a three sport athlete playing football, basketball, and track.  In 2019 he lettered ( for the third time) and was nominated as a captain.
He says that he leads by example and vocally, out there on the practice field and in games.
“It’s important to lead by example, but also you got to get your guys going at times,” he explained.
Second year head coach Tom Phillips had this to say about his junior captain,
“I can best describe Clayton as a born leader with an intrinsic and unmatched drive for excellence in all endeavors,” Phillips said.
“Clayton's positive leadership skills, dedication to craft and teammate responsibilities earns him respect by our players, football staff, parents and the community at-large. “
Away from the field, he got a chance to go on a mission trip to Memphis, Tennessee in eighth grade working on houses.
He said it was a rewarding and unique experience he had to help those in need.
“I went with some of my good friends through a mission trip with my church actually, and we got to paint houses, it was really cool to help some elderly people who really couldn’t do that.”
We wish Ellie and Clayton the best in all of their future endeavors.
Read 2269 times Last modified on Thursday, 07 November 2019 16:02
Tweet
Published in Student Athlete of the Week
Tagged under