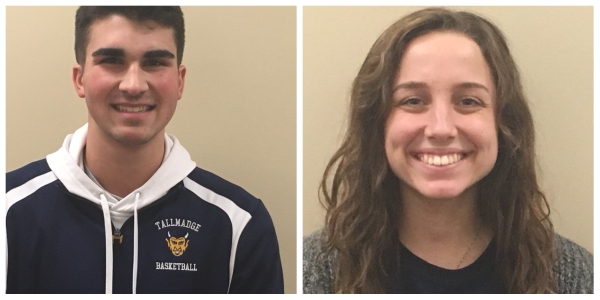 This week our 1590 WAKR Male Student Athlete of the Week is Danny Kurko, a senior basketball player from Tallmadge High School.

Danny says that he’s looking forward to his senior season.
“Last year we made the district championship game and we lost, but it was a great experience and we had energy all around the team,” he explained.
A two-sport athlete in both basketball and track, Kurko is a team captain for the Blue Devils team on the hardwood.
He says being that leader on the floor is a responsibility he takes pride in.
“I try to give guys high-fives and tell them they had had a good play whenever they are out there, just encourage my teammates to do better.”
His coach Bill Johnson said that Danny is a true leader on and off the court.
“Danny is the kind of player a coach dreams about. He comes in every day, works as hard as he can and tries to improve. On top of that, he is a great ambassador for our program,” he said.
“He supports all other teams and programs in Tallmadge and truly cares about the school and community.”
In addition to being an athlete for Tallmadge, Danny is a member of the Pep Club as well as a participant in volunteer work for St. Matthew Parish.
Upon graduation in the spring, Kurko plans on attending Kent State University and majoring in Sports Management.
Our next Female Student Athlete of the Week is Jill Catalano, a senior basketball player from Tallmadge High School.
Jill is a three sport athlete in volleyball, basketball, and track and field.
She says that her mother has been the biggest inspiration to her academic and athletic career.
“My mom has been my biggest supporter no matter what,” Catalano explains.
In addition to being a student athlete, she is also a member of the National Honor Society, Fellowship of Christian Athletes, and Suburban League Leadership among other groups.
She says that that group in particular (the Suburban League Leadership Group) has been instrumental in her growth as a player and as a person.
“Being an athlete is more than just playing sports, it’s getting out in the community, getting involved with people around your neighborhood, and also in the school.”
Her coach Brett Bickar said that she is one of those student athletes any coach would want to have in their program.
"She is a player every coach would love. Always 100% effort in games as well as practice. Very encouraging to players on the team, freshman to senior," he said.
"She is very generous as a person, she will do anything she can to help someone, from working with the youth to taking extra time to give others a ride to or from practice. "
Upon graduation in the spring, she is undecided on where she will attend college, but plans on majoring in something related to the medical field.
We wish Danny and Jill the best in all of their future endeavors.
Read 2085 times Last modified on Thursday, 14 November 2019 15:19
Tweet
Published in Student Athlete of the Week
Tagged under