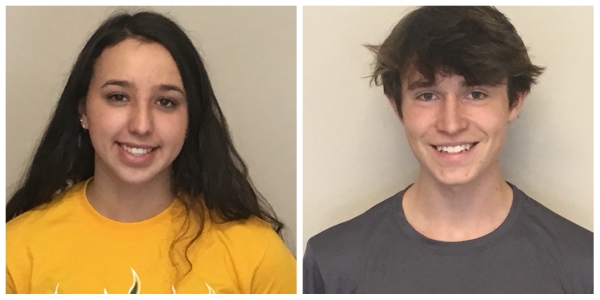 This week our 1590 WAKR Female Student Athlete of the Week is Alison Zupancic, a junior volleyball player from Firestone.

Alison says that she likes the family and team aspect of playing volleyball with her teammates and friends.
In 2019 she was chosen as the Player of the Year at Firestone and earning that award was a testament to her hard work.
“It showed me that I really am giving a lot to the team and how much I’m putting in is being received,” she said.

Also in 2019, she was named as the 2019 top setter, named to the All City Academic Team, and was named First Team All City amongst other awards and honors.
She explained that being a Firestone student athlete is a great experience all around.
“I think everybody on the team is there to have a good time and to win and put everything out there,” Alison said.
Coach Stacey Evans said she is the epitome of a student athlete.
“She carries above a 4.0 while serving as a team captain,” she said.
“Ally is not only skilled on the court, having earned 1st Team All City, but she is caring, helpful, responsible, and principled.”
Off the court, she volunteers at the Akron-Canton Regional Foodbank and also helps with different elementary and middle school programs in athletics and other activities.
Alison is also involved in the arts program at Firestone in addition to being a student athlete for the Falcons.
Our next Male Student Athlete of the Week is Clay Peets, a junior cross country runner from Firestone.
He says that even though it’s an individual sport, the team aspect is present at all times.
“We’re all brothers,” he said.
“We all push each other, whether we’re running on the Towpath or running a speed workout on the track we try to push ourselves to not only bring success individually, but as a team.”
This year, Clay qualified for the state meet in Hebron, Ohio and was also named City Series Champion, Academic All Ohio, and was a team MVP.
Aaron Varner, Clay’s coach, said that his work ethic sets him apart
“He’s a great young man, he’s driven, he’s focused, and he’s a great leader for our team,” he said.
“Clay’s done something that hasn’t been done at Firestone since 1985, and that’s qualify for the state meet and that speaks to his work ethic and his leadership.”
Away from the cross country trails, Clay is involved in the engineering program at Firestone and is a member of YoungLife, a Christian youth group in the area.
We wish Alison and Clay the best in all of their future endeavors.
Read 1958 times Last modified on Thursday, 21 November 2019 17:25
Tweet
Published in Student Athlete of the Week
Tagged under