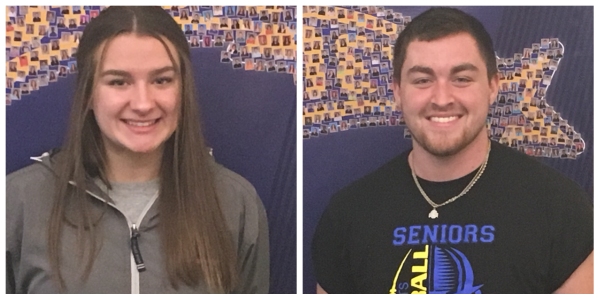 This week our 1590 WAKR  Female Student Athlete of the Week is Leah Ungashick, a senior volleyball player from Coventry High School.

She says it's been an amazing ride being a Comet student athlete.
"Being an athlete here, I've met some of my best friends, and it's been an amazing feeling," she said.
Leah was named as the Player of the Year and an all-conference first team member. She was also named a scholar athlete and a team MVP.  She says those honors are attributed to the work that she puts in on and off the court.
Her coach Breanna Caslow said that she is the model of a student athlete at Coventry.
"Leah is a true leader, she was my starting setter for the past 3 seasons and she knew exactly how to run an effective offense," she said.
"She is one of the hardest working players I have ever coached and would always go the extra mile and help her teammates on and off the court."
Away from the volleyball court, she is the vice president of the National Honor Society and a member of the Key Club.
Upon graduation in the spring of 2020, Leah is undecided on where she will attend college, but plans to major in psychology.
She says that helping people is the aspect of psychology that grabbed her attention when looking at possible careers and majors.
"I'm just very interested in the counseling aspect of it,  I really like helping people and figuring out what's going on with them," she explained.
Our next Male Student Athlete of the Week is Reese Brunson, a senior football player from Coventry High School.
He says it’s been a great experience being a student athlete at Coventry throughout his four years.
“I love playing for the school, we have great staff, teachers, and it’s a good family atmosphere at Coventry,” he said.
Reese is a two-sport athlete playing both football and baseball for the Comets. He had some adversity this season missing half of his senior season with a broken collarbone.
He talked about that experience, saying it was tough, but he drew some positives from it.
“It was real hard, but it gave me a chance to get closer to the younger guys and help them through the season,” he said
His coach Ed Egan spoke about Brunson's dedication and work ethic.
"He's super intelligent, he's a true leader, a leader in the classroom, hallways, lunch room, playing fields & locker  room," he said.
"He plans on teaching and coaching, so he's  helping coach in the Thanks4Giving all star game in Barberton.”
In addition to being an athlete, he's a part of the yearbook staff and works on producing the senior video for the class of 2020.
Upon graduation in the spring of this coming year, he plans on majoring in Secondary Education and History where he looks to be a teacher and a football coach.
We wish Leah and Reese the best in all of their future endeavors.
Read 2366 times Last modified on Wednesday, 27 November 2019 07:18
Tweet
Published in Student Athlete of the Week
Tagged under