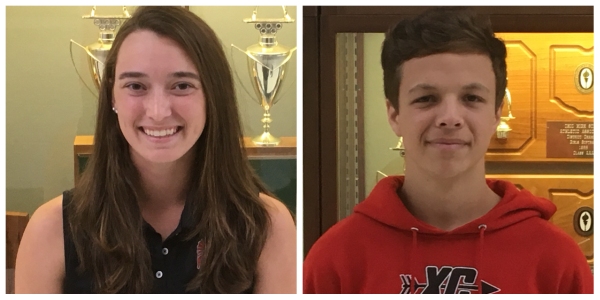 This week our 1590 WAKR Female Student Athlete of the Week is Karly Devaney, a senior golfer from Springfield High School.

She says that she got into golf from her father and grandfather and that she enjoys working with her coaches and teammates.
“You definitely get very close to them, especially with golf and practice probably every day, and with Coach (Kevin) Hanna, it’s cool just because I’ve had him as a teacher and now as a coach, I can go to him whether it’s for golf or for school,” she explained.
Devaney is a two-sport athlete competing in both golf and softball for the Spartans.
She says the atmosphere is what keeps things going at Springfield and the whole community is supportive of her and her fellow students who compete in sports.
“You get so close to so many people and there’s underclassmen that I probably wouldn’t know if it wasn’t for my sports, and a lot of them have become my best friends,” she said.
Coach Kevin Hanna says that Karly is the model student athlete ambassador.
“She has been a leader on the team to our younger players and a great example of what hard work will do for a person in the classroom and on the golf course,” he explained.
“She is a 4 year letter winner and in those 4 years the team has a record of 48 wins to 15 losses and she has earned two 1st team PTC honors.”
In the community, she volunteers at a local food pantry and at school, she is a peer tutor and secretary of the National Honor Society.
Upon graduation in the spring, Karly plans on attending Geneva College to study biomedical engineering and forensics.
Our next Male Student Athlete of the Week is Carter McCollum a senior cross country runner from Springfield High School.
Carter is a four year varsity letterman in cross country, track, and indoor track, leading his team to the state regionals in cross country as a junior as well as going to regionals in track in the 1600 meter race.
He says the most enjoyable part about being with his teammates is the fact that they push each other and make each other better.
His coach Kevin Gorby says that dedication is there day in and day our for McCollum.
“Carter is one of the most dedicated runnersI have coached at Akron Springfield,” he says.   “Carter is a great role model for our younger runners and has always done whatever is needed to make our team great!”
Away from the trails, Carter is a member of DECA and helped set up and volunteer for Community Race as well as serve as a counselor for Cross Country at the middle school camp.
Upon graduation in the spring, Carter plans to attend Youngstown State University to study Business and Marketing.
We wish Karly and Carter all the best in their future endeavors.
Read 1120 times Last modified on Thursday, 26 September 2019 16:25
Tweet
Published in Student Athlete of the Week
Tagged under